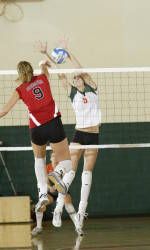 RALEIGH, N.C.- Middle blocker Ciara Michel finished with a team-high 16 kills and setter Katie Gallagher reached the 50-assist mark for the fifth time this season as Miami defeated N.C. State, 3-1, Friday night at Reynolds Coliseum. With the win, the Hurricanes snapped a six-match losing streak to improve to 9-10 overall and 3-7 in Atlantic Coast Conference play while the Wolfpack dropped their 16th-straight match to fall to 3-17 overall and 0-10 in league play.

“It is great to get back on the winning track,” head coach Nicole Lantagne Welch said. “We got a lot more production from the middle tonight and Ciara Michel was at the center of that effort. She had a big match offensively in addition to chipping in with some blocks as well.”

The Hurricanes, after falling behind 1-0 after a 30-17 loss in game one, were able to turn things around and even up the score with a close 30-28 game-two win. From there, Miami carried its momentum into game three with a 30-26 win before eventually clinching the match with a 30-25 game-four win.

“We made some nice changes in game one that ultimately led to the change of flow in the match,” Lantagne Welch said. “Bridget Bomhack provided a spark for us and really swung well and Cassie [Loessberg] also stepped up her game and made a lot great digs as the match progressed.”

In addition to Michel, three other Hurricanes finished in double-digit kills with Bomhack recording 13 and Genny Mayhew and Maria Andersson finishing with 12 and 11 respectively. Gallagher directed the UM offense, finishing with 52 assists while also tallying seven kills and seven digs. Andersson, who continues to play well as of late, recorded her third double-double of the season adding 16 digs to her 11 kills.

Loessberg finished with her highest dig total this season in a four-game match and her second-highest total overall, collecting 27 on the night. Michel led the club with five total blocks while Gallagher and Loessberg each finished with two aces on the night.

N.C. State’s Chrissy Zirpolo ended up with a match-high 18 kills while Lauren Zaniboni added 12. Alex Smith led the offense with 36 assists while Zirpolo paced four Wolfpack in double-figure digs with 13.

UM will return to the court Saturday when it makes the short trip over to Chapel Hill to face North Carolina Saturday, Oct. 20 at 6 p.m. at the Carmichael Arena.