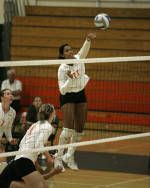 Maria Andersson and Angelica Ellis joined Woods in the double-digit kill column with 11 and 10 respectively. Cassie Loessberg led UM with 14 digs on the night while Genny Mayhew added 13. Mayhew’s seven-match streak of recording double-digit kills came to end tonight with the sophomore finishing with eight.

Katie Gallagher and Bridget Bomhack split the setting duties with 23 and 22 respectively while Bomhack also finished with five kills eight digs. Ciara Michel, who had six kills on the night, added five total blocks to lead UM at the net.

Jade Brown and Beth Gillming each finished with 12 kills to go along with Brown’s 13 for Maryland. Hayley Hanson and Tedi Doucet finished with 21 and 16 assists respectively while Maggie Schmelzle led the Terps with 12 digs.

UM will return to the court next weekend when the team travels to North Carolina to take on N.C. State Friday, Oct. 19 at 6 p.m. in Raleigh before making the short trip to Chapel Hill to face UNC Saturday, Oct. 20 at 6 p.m.