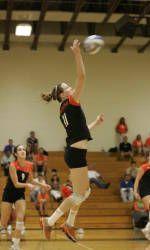 CORAL GABLES, Fla. –Miami volleyball dropped its second match of the weekend, 3-0, to No. 14 Duke Sunday afternoon at the Knight Sports Complex. Genny Mayhew led the Hurricanes with 16 kills and eight digs in a losing effort while Rachael Moss and Carrie DeMange each finished with 17 kills for Duke.

“Overall, I was a little disappointed in our effort on the defensive end of the ball,” head coach Nicole Lantagne Welch said. “Offensively we did some nice things. We ran a better offense today, we were able to get a lot more one-on-one opportunities to score but defensively we needed to be able to slow them down.”

“I was definitely pleased with the offensive production out of Ashley Woods and Genny Mayhew,” Lantagne Welch said. “They did an excellent job of scoring against a strong team today.”

Ashley Woods hit a team-best .625, finishing with 10 kills on 16 attempts without committing an error while Mayhew, who recorded just three errors on 38 attempts, hit .342 on the afternoon.

Four Blue Devils finished with double-figure kills led by Moss and DeMange while Sue Carls and Jourdan Norman each had 10. Ali Hausfeld set up the Blue Devil offense with 47 assists while Jenny Shull tallied a match-high 14 digs. Norman, in addition to her contribution offensively, finished with two solo blocks and two block assists.

The `Canes will return to action next weekend when the second half of their four-match ACC homestand continues with Clemson and Georgia Tech visiting the Knight Sports Complex. UM will take on the Tigers Friday, Oct. 5 at 7 p.m. before hosting the Yellow Jackets Sunday, Oct. 7 at 12 p.m.