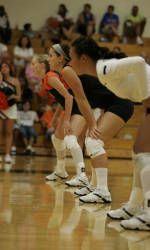 CORAL GABLES, Fla. – After picking up its first two wins of the ACC season last week over Virginia Tech and Virginia, the University of Miami volleyball team returns home this weekend to take on Wake Forest Friday, Sept. 28 and No. 14 Duke Sunday, Sept. 30 at the Knight Sports Complex.

“It’s great to be back home playing our ACC home-opener and were excited to go up against Wake Forest Friday night,” head coach Nicole Lantagne Welch said. “We know that they have some really nice players and as a team they’ve been playing well recently.”

Friday’s match against the Demon Deacons, which will be broadcast live via ACC Select at www.ACCSelect.com, will begin at 7 p.m. while the Hurricanes and Blue Devils will square off at 12 p.m. on Sunday.

“We’re preparing to raise our level of play this week to ensure more success as we head deeper into the ACC season,” Lantagne Welch said.

The Hurricanes (8-4, 2-1 ACC), after dropping their first ACC match at FSU, rebounded to pick up consecutive 3-2 wins at VT and UVA last week. Genny Mayhew carried the team offensively with 26 and 25 kills respectively, setting a new career-high in kills against the Hokies in Blacksburg before nearly matching the mark a day later versus the Cavaliers in Charlottesville. In addition to her 25 kills against UVA, Mayhew also recorded a career-high 20 digs to reach the 20-20 mark for the first time at UM since Valeria Tipiana finished with 21 kills and 20 digs against Maryland on Oct. 9, 2004.

Mayhew leads the team in kills this season with 165 while Ciara Michel and Bridget Bomhack sit in a tie for second on the club with 125 apiece. Michel, who currently leads the team with a .262 hitting percentage, finished with a season-high 20 kills against Virginia, recording double-digit kills for the first time in UM’s last seven matches.

Katie Gallagher recorded at least 50 assists in back-to-back matches for the first time in her career this past week with 50 against the Hokies and career-high 62 against the Cavaliers. For the season, Gallagher is one of just four players in the ACC with at least 500 assists and ranks sixth in the league with a 10.54 assists per game average. She also leads the league in aces (47) and ranks sixth nationally with a .077 aces per game average.

Cassie Loessberg, who recorded over 20 digs in both matches this past week, leads the team and ranks second in the ACC with 260 digs thus far. She is joined defensively by three other Hurricanes with at least 100 digs through UM’s first 12 matches. Bomhack, who in addition to being tied for second on the team in kills, ranks second in digs (149), assists (68) and aces (14). Gallagher and Michelle Bruin rank third and fourth in digs with 143 and 104 respectively.

Michel has stepped up her performance at the net as of late, with two of her three highest block totals coming against VT (eight) and UVA (11). She currently ranks sixth in the ACC averaging 1.42 blocks per game.

UM enters the weekend having won six of its last seven matches after starting the season 2-3.

About Wake Forest
The Deacons (5-7, 2-1 ACC), after starting the season 0-4, have won five of their last eight including their last two matches against ACC opponents Boston College and Maryland. Prior to back-to-back sweeps against the Eagles and the Terrapins, Wake Forest dropped its ACC opener, 3-0, at Duke. The Deacons have two players with at least 150 kills in Jessica Furlong (182) and Natalie Mullikin (150). The offense is set up by the duo of Kelsey Jones and Dylan Faulkner who have tallied 284 and 210 assists respectively while the defense is led by Megan Thornberry and Mulkin. Thornberry leads three Demon Deacons in triple-digit digs with 149 while Mulkin has a team-best 49 total blocks.

About Duke
The Blue Devils (8-3, 3-0 ACC) come into town riding a three-match winning streak, with all three wins coming against ACC opposition. After starting the season 4-0, Duke dropped three of its next four matches, including losses to two Top-5 opponents in No. 4 USC and No. 1 Nebraska. Since league play began, the Blue Devils have shutout Wake Forest and Boston College and downed Maryland, 3-1, with all three matches played in Durham. Carrie DeMange leads Duke with 201 kills and leads the league with a 5.15 kills per game average. Setter Ali Hausfeld leads the ACC with a 14.15 assists per game average while Jenny Shull leads the defense averaging a team-best 5.47 digs per game.

Fans can follow both matches via GameTracker at www.hurricanesports.com. To access GameTracker, visit the team’s schedule on the Miami volleyball page. The Hurricanes match Friday night against Wake Forest can be heard live on the University’s student network WVUM 90.5 FM. For tickets, contact the Hurricane ticket office at 1-800-GO-CANES.