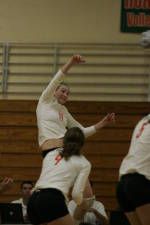 BLACKSBURG, Va. –Genny Mayhew finished with a career-high 26 kills and Katie Gallagher reached the 50-assist mark for the third time this season as Miami volleyball picked up its first ACC win of the season with a 3-2 victory over Virginia Tech Thursday night at Cassell Coliseum.

The `Canes jumped out to an 8-1 lead in the deciding game five before the Hokies rebounded with six straight points to cut the UM lead to 8-7. Miami refused to relinquish the lead, bouncing back with three straight points to go up 11-7 before eventually prevailing 15-10 to clinch the victory.

“We are thrilled to get a win on the road in a tough gym to play in,” head coach Nicole Lantagne Welch said. “Genny came out and swung really well tonight and really added some variety to our offense.”

“I was really pleased with our blocking effort,” Lantagne Welch said. “I thought we did a good job of taking them out of rhythm offensively by being big and playing effectively at the net.”

Mayhew, in addition to collecting a career-best 26 kills, also set a new personal mark with 66 attack attempts, over one-third of the team’s 185 attempts on the night. Michel and Bridget Bomhack also had a solid night offensively with each recording eight kills while Cooke and Gallagher each finished with six.

Cassie Loessberg reached the 20-dig mark for the fifth time in 11 contests, tallying 24 to lead three `Canes in double-figures with Bomhack and Gallagher recording 16 and 11 respectively. Michelle Bruin also chipped in with eight digs.

“Cassie and Michelle did a great job tonight of putting Katie in a position to set up our hitters,” Lantagne Welch said.

UM returns to the court Friday night when the team travels to Charlottesville to take on Virginia at 7 p.m. Fans can follow the match via GameTracker at www.hurricanesports.com. To access GameTracker, visit the team’s schedule on the Miami volleyball page. The match can also be seen live on ACC Select at www.ACCSelect.com.