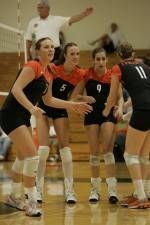 “We were extremely tentative right from the start and you’re not going to be able to compete or win games in the ACC if you are playing back on your heels,” head coach Nicole Lantagne Welch said. “Ciara had a great match and we just didn’t pass the ball well enough to get her enough sets.”

In addition to Loessberg’s play on the defensive end, Andersson and Bridget Bomhack finished with seven and six kills respectively while Michel, Bomhack and Ariell Cooke all finished with two block assists.

FSU’s Mira Djuric led all players with 13 kills on the night while Nikki Baker led the Seminole offense with 28 assists. Makini Thompson and Jackie Bonsalle each recorded seven kills while Brianna Barry had a strong night at the net with six total blocks. As a team, Florida State tallied 14 service aces to just five for UM.

FSU got out to an early 10-4 lead in the opening game before a brief UM run cut it to 14-11. The Seminoles won three of the next four points, taking a 17-12 lead before pulling away for a 30-17 win in game one. Djuric had five kills and all five of her service aces for FSU while Michel had four of UM’s seven kills in the game.

The two teams were knotted up at six in game two before a 6-1 FSU run put the Seminoles up 12-7. FSU extended its lead to 21-10 before Miami turned momentum to its side with a 9-1 run to bring the Hurricanes within four at 22-19. After an FSU timeout though, the Seminoles were able regain control before eventually pulling away for a 30-24 game two win. Loessberg finished the game with eight digs and Genny Mayhew had five kills while Djuric and Thompson each finished with four kills for Florida State.

The two teams battled back and forth to start game three with UM taking an early 10-9 lead. Florida State would then make a 13-4 run to go up 22-14 before pulling away in the end.

The Hurricanes return to the court next week when the team heads to the state of Virginia to take on Virginia Tech and Virginia on back-to-back days. UM travels to Blacksburg to battle the Hokies Thursday, Sept. 20 before making the short trip to Charlottesville to take on the Cavaliers Friday, Sept. 21. Both matches are scheduled for a 7 p.m. start.