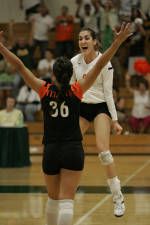 “We are really looking forward to starting conference play,” head coach Nicole Lantagne Welch said. “We are coming off a strong weekend and we know it is going to be a great battle with FSU.”

The `Canes have swept their last four matches, including all three opponents this past weekend en route to the 2007 Hurricane Invitational title. Miami (6-3) and FSU (3-5) split both matches last season with each team winning in five games on the opponent’s court. The Seminoles won in Coral Gables on Sept. 19 before UM evened the score in Tallahassee Oct. 17.

Ashley Woods, who was named tournament MVP for her performance during the Hurricane Invitational, leads UM with a .306 hitting percentage while Genny Mayhew continues to lead the team in kills with 109.

Cassie Loessberg leads the team and the conference with 201 digs and a 5.74 digs per game average while freshman Katie Gallagher also ranks atop the conference rankings in aces (32) and aces per game (0.96).

FSU is led by Mira Djuric, Makini Thompson and Briana Berry on the offensive end with the trio combining on 68 percent of the team’s 396 total kills. Djuric, who leads all Seminoles with 97 kills, also leads the club and ranks third in the league with 0.69 aces per game average. Lauren Rosenthal leads the FSU offense, averaging 8.71 assists per game while Summer Weissing leads the Seminole defense with 106 digs thus far.

“They are a big, physical team and we know we are going to have to play some great volleyball,” Lantagne Welch said. “Playing your rival always brings out the best in each other.”

Fans can follow the match via GameTracker at www.hurricanesports.com. To access GameTracker, visit the team’s schedule on the Miami volleyball page. The match can also be seen live on ACC Select at www.ACCSelect.com.