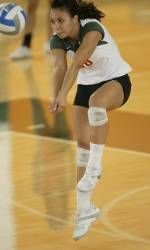 CORAL GABLES, Fla.-Miami volleyball returns to the Knight Sports Complex this weekend for its second home tournament when it hosts Loyola University Chicago, Brown and Delaware in the Hurricane Invitational, Sept. 7-8.

The Hurricanes, set to play in their third tournament in as many weekends, finished 1-2 at last weekend’s Marquette Kick-Off Tournament in Milwaukee, Wis. After falling to UT Arlington and host Marquette to start the tournament, Miami (3-3) was able to bounce back to defeat Oakland, 3-0, in its final match heading into this weekend.

“I feel our team has been passing well, serving well and playing very good defense,” head coach Nicole Lantagne Welch said. “The areas we need to pick it up for this weekend are our hitting efficiency and our blocking. If we can make some big improvements in those areas, I think we will have a lot of success.”

The action at the Hurricane Invitational starts Friday afternoon at 4 p.m. with Brown (0-0) taking on Delaware (8-0) before UM hosts Loyola (2-4) in the nightcap at 7 p.m. Saturday’s schedule features four contests with play starting at 10 a.m., matching Delaware with Loyola. The following match pits the Hurricanes against Brown at 12:30 p.m. in the final game of the day’s first session. The tournament resumes later in the afternoon at 5 p.m. with Loyola taking on Brown before Miami and Delaware will battle in the tournament’s finale at 7:30 p.m.

Miami’s trio of Genny Mayhew (80 kills), Ciara Michel (72) and Bridget Bomhack (69) have combined for over half of the team’s 387 kills thus far. Bomhack, whose sister Marcie is the head coach of Loyola, has proven to be one of the `Canes top all-around players early on, ranking third on the team in kills, second in assists (62), third in aces (9), second in digs (87) and second in total blocks (17).

Cassie Loessberg is coming off a solid weekend in which she was named to the all-tournament team after collecting 91 digs over the Hurricanes’ three matches, including a UM single-match record of 49 against UT Arlington, Sept. 1. Katie Gallagher continues to lead the offense, averaging just under 10 assists per game while also leading the club with 25 aces thus far.

About Loyola
The Ramblers have wins this season over DePaul and Iona with losses to Northwestern, Western Michigan, Memphis and most recently Eastern Illinois. They are led offensively by outside hitter Sarah Singer, who has 81 kills through six matches and is averaging 3.86 kills per game. Lauren Ditscheit runs the LUC offense with 159 assists while Keily Zins leads three players with at least 50 digs thus far having recorded 67. Mallory Curran and Colleen Francis have combined 40 total blocks.

About Brown
The Bears will be taking the court for the first time this season Friday afternoon against Delaware. Coming off an 8-18 record in 2006, Brown returns its top hitter in Julie Mandolini-Trummel (.259 %), its setter Natalie Meyers (11.00 agp) and top defensive player in Katie Lapinski (5.68 dpg).

About Delaware
The Blue Hens enter the tournament with a perfect record, having only lost four games in eight matches in this season. Delaware took out Boston College, Binghamton and South Carolina to open the season at home in the Delaware Invitational before winning a mid-week match at Temple. This past weekend the Blue Hens took out Alcorn St., Nicholls St. and New Orleans before beating in-state rival Delaware St. on Tuesday. Outside hitter Colleen Walsh is the Blue Hens’ top force offensively, with 136 of the team’s 434 kills. Megan Welch (12.11 apg) leads the offense while Stephanie Barry stands out defensively with 176 digs this season.

The Hurricanes match Friday night against Loyola can be heard live on the University’s student network WVUM 90.5 FM. Fans can follow every match of the tournament via GameTracker at www.hurricanesports.com. To access GameTracker, visit the Miami volleyball page and click on the 2007 Hurricane Invitational link. For tickets, contact the Hurricane ticket office at 1-800-GO-CANES.