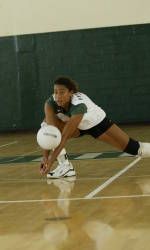 MILWAUKEE, Wis.-The Miami volleyball team split two matches Saturday on the final day of the Marquette Kick-Off Tournament at the Al McGuire Center, losing to UT Arlington, 3-2, before rebounding to shutout Oakland, 3-0, later in the afternoon.

In the Hurricanes’ second match of the day, Ashley Woods and Bridget Bomhack led the team with 12 and 11 kills respectively as UM (3-3) won 30-15, 30-21 and 30-27. Katie Gallagher collected 25 assists and 13 digs, Cassie Loessberg led all `Canes with 18 digs and Ciara Michel finished with four block assists.

“We played much cleaner volleyball this afternoon and played really well overall, especially the first two games,” head coach Nicole Lantagne Welch said after UM’s second contest Saturday. “I was very pleased the way Cassie continues to play, passing well and keeping a bunch of balls up on defense.”

In Miami’s first match of the day, the team suffered its third five-game defeat, losing 32-30, 26-30, 30-19, 22-30, 15-12. Genny Mayhew set a new career-high leading all UM players with 21 kills while Bomhack and Michel also contributed offensively with 17 and 16 kills respectively. Loessberg joined Mayhew in setting a new personal career-high, tallying 49 digs in a losing effort.

“The bottom line is we have to learn how to separate ourselves, Lantagne Welch said. “We’ve shown that we can play with everybody but we just need to find a way to win the close matches.”

UM returns to the court next weekend for their third tournament of the season and second at home with the Hurricane Invitational, Sept. 7-8. The Hurricanes will welcome Loyola Chicago, Brown and Delaware for the round-robin style tournament at the Knight Sports Complex before the team enters ACC play Sept. 14 at Florida State.