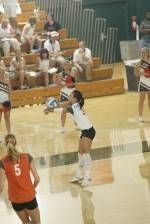 MILWAUKEE, Wis.-Despite forcing a fifth game after a 30-24 win in game four, the Miami volleyball team lost a close match Friday night to Marquette, 3-2, at the Marquette Kick-Off Tournament at the Al McGuire Center. After falling behind 4-0 to start game five, Miami pulled to within one at 9-8 before the Golden Eagles went on a 6-3 run to end the match.

“The match was hard-fought and I thought we put forth a really good effort,” head coach Nicole Lantagne Welch said. “We just couldn’t execute key points when we needed to in game five.”

Five players finished with double-figure kills for UM (2-2). Ciara Michel led the group with 13 kills, Maria Andersson and Genny Mayhew each finished with 11 while Ariell Cooke and Ashley Woods each recorded 10. In a homecoming weekend for for Wisconsin native Bridget Bomhack, the junior had a strong match with eight kills, 25 assists, 13 digs and six total blocks.

Katie Gallagher joined Bomhack in setting up the offense, tallying 28 assists along with 13 digs. Cassie Loessberg led four Hurricanes in double-digit digs with 24 while also collecting five of the teams eight aces on the night.

“I was very pleased with the way Cassie served tonight,” Lantagne Welch said. “We really had some had big runs when she was behind the line.”

After falling behind 1-0 after a 30-26 loss in game one, UM bounced back with a win by same score in game two. The Golden Eagles went up 2-1 with a 30-24 win in the third game before Miami tied it back up in game four.

“Ariell came off the bench and had an awesome night offensively for us,” Lantagne Welch said. “Genny Mayhew made a good turnaround in the match and really started to pick up her offense but ultimately we couldn’t get enough scoring from enough people.”

Kimberly Todd led all players with 27 of Marquette’s 59 kills while Ashlee Fisher was the only other Golden Eagle in double-digits with 10. Katie Weidner tallied a match-high 50 assists while Terri Angst led the defense with 19 digs. Jenn Brown and Todd had big nights at the net for MU, finishing with 10 and nine total blocks respectively.

The Hurricanes will play two matches on Saturday at the Al McGuire Center. UM will take on UT Arlington in the first match of the day at 11:30 a.m. EST before taking on Oakland at 5:30 p.m. EST.