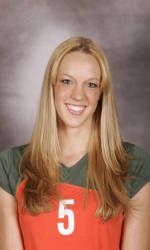 Michel, one of 18 players chosen to the preseason squad by the league’s head coaches, is coming off a 2006 campaign in which she led the team in both blocks per game (1.41) and hitting percentage (.299) en route to All-ACC Second Team honors.

“Ciara had an excellent season her junior year,” UM head coach Nicole Lantagne Welch said. “She was one of our most consistent players from start to finish and was a really a big force in the ACC.”

Michel (Miami/Palmer Trinity) also finished second on the team with 336 kills while playing in all of Miami’s 119 games last season.

“This is a well-deserved award and I expect her to have an outstanding senior year,” said Lantagne Welch. “She has the ability to be one of the top middle blockers in the conference.”

The Hurricanes, just days into fall practice, open their 2007 campaign Aug. 24 against Hofstra on the first day of the Orange and Green Challenge at the Knight Sports Complex.