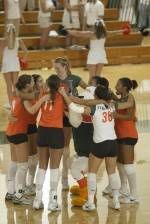 Coral Gables, Fla. – Prepvolleyball.com announced the top-30 recruiting class of 2007 today, as the four talented freshman joining the University of Miami’s volleyball program this season are ranked 26th in the country.

“There are opportunities aplenty in Coral Gables for this super athletic class”, repvolleyball.com, stated. “Both Cooke and Williamson have supreme athletic gifts and the volleyball IQ to land them on the court early for the Canes.”

Cooke and Williamson both appeared on prepvolleyball.com’s “senior aces” list as Nos. 53 and 80 respectively. In addition, Cook was tabbed as one of the top-50 incoming freshman in the nation, while Williamson ranked amongst the top-100.

Prepvolleyball.com commented that Cooke was, “amazing off of one foot and blocks very well for an undersized middle.”

“Williamson is a converted middle with tremendous vertical acceleration and a fast arm. She’ll either beat the block or hit over it.”

“Gallagher, who set her high school team to three consecutive state titles, has the speed, smarts, experience and winning pedigree to create competition for the [setter] position.”

Local Miami stand-out, Alvarez will look to make an impact to the libero position this coming fall.

Miami is one of two Atlantic Coast Conference schools to land a spot on the list, sitting two slots above Boston College, who are ranked 28th with the addition of six new players joining the squad.

The Hurricanes will kick-off their 2007 season August 24-25, as they host the Green and Orange Challenge, welcoming Hofstra University, Jacksonville University, and Butler University.