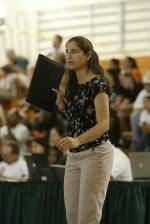 Miami’s 2007 slate will feature three early season tournaments, including two at home, and an Atlantic Coast Conference schedule that will have Miami play every team in the conference both at home and away.

The Hurricanes will open the season at home where they will host the Green and Orange Challenge August 24-25. Miami will welcome the 2006 Colonial Athletic Association Champions Hofstra University, Atlantic Sun Champion runner-up Jacksonville University, and Butler University to the Knight Sports Complex. Last season, the Pride of Hofstra made their sixth appearance in the NCAA tournament.

Miami will then head out on the road where they will compete at the Marquette Tournament, taking on tournament-host Marquette the opening night, August 31. The following day, the Hurricanes will match-up against the University of Texas Arlington in the morning, and then take on Oakland University that afternoon.

UM will compete in another full weekend of volleyball, as they host their seventh-annual Hurricane Invitational September 7-8. The Hurricanes will welcome Loyola University Chicago, whom they face the opening night, Brown University, and the University of Delaware.

Miami will commence Atlantic Coast Conference action when they head north to take on in-state rival Florida State on September 14. This season marks the second consecutive year that Miami will open conference action against the Seminoles. The following weekend, the Hurricanes will remain on the road as they take on Virginia Tech and Virginia, September 20 and 21, respectively.

The Hurricanes return home where they host two weekends back-to-back against Wake Forest (Sept. 28) and defending league champion Duke (Sept. 30). The Blue Devils advanced to the second round of last season’s NCAA tournament and finished 22nd in the CSTV/AVCA poll. Miami will then take on Clemson (Oct. 5) and Georgia Tech (TBD) the following weekend.

Miami will continue on a four-match road-swing where they will travel to Boston College on October 12 before squaring off against Maryland the following evening. Friday, October 19 Miami will head to the state of North Carolina to take on North Carolina State (Oct. 19) before facing North Carolina (Oct. 20).

On the following Tuesday, October 23, Miami will compete in the second-half of ACC competition at home against Florida State. That weekend, Virginia and Virginia Tech will travel to Coral Gables, October 26-27.The Hurricanes will kick off the month of November on the road against Duke (Nov. 2) and Wake Forest (No. 3), before returning back to the Knight Sports Complex to host Maryland (Nov. 9) and Boston College (Nov. 11).

Miami will then travel to South Carolina to take on Clemson (Nov. 15) and Georgia to face Georgia Tech (Nov. 16) before closing out the regular season at home with matches against North Carolina (Nov. 21) and N.C. State (Nov. 23).