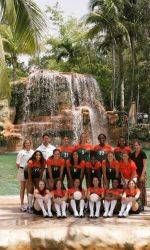 Frannie Savage played her final match in front of an excited Hurricane crowed leading posting 11 kills, four digs and one assist. The outside hitter is 11 kills away of 400 on the season, and is just 94 kills away from matching last year’s season high of 483 total kills. She lead Miami with a total of 389 kills on the season.

Jill Robinson led the Hurricanes with 42 assists and posted 10 digs, for her thirteenth double-double. Robinson was just three kills shy of a triple-double as she registered seven kills. She now has 1,084 kills on the season.

Leading in defensive digs, Ann Gallo led all players in with a total of 19. The senior leads the Hurricanes with 271 digs on the season.

Freshman libero, Cassie Loessberg, shined on the offensive end for Miami as she posted a season high 10 kills and chimed in 10 digs registering her first double-double for the season.Ashley Woods contributed on the offense as well by putting up 11 kills, while sophomore Angelica Ellis put up eight kills.

Ciara Michel’s defense of six blocks put her in the lead of all players. She also registered seven kills.

Game one saw 11 tied scores, as both teams battled for the lead before Miami ran away with the 30-26 game-win. It was the Hurricanes who stayed close on the Cavalier’s heels posting each tied score. Angelica Ellis came with a kill to put the score at 20-all. This was the last time Miami had to battle for the lead, as they took control the rest of the way leading by as much as three with the score 27-24, forcing Virginia to take a timeout. Despite a service error, Miami went on to put up one last kill by Savage, and was given the upper hand as Virginia registered three errors and only one kill, for the win.

In game two, Virginia came out with the early 15-10 lead. The Cavaliers led by as much as seven points with the score 24-17. With the score, 25-18, the Hurricanes were able to put the score within four as Loessberg jammed in a kill and Virginia posted two errors sending the Cavaliers to the bench for a timeout. Back on the court, the Hurricanes only put up three more points with a kill off from Michel and two errors dropped in by Virginia. The Cavaliers headed to the locker room tieing the match 1-1 with a 30-24 win.

Virginia jumped out on top with an early 15-11 lead in game three. After going on a five-point lead, the Cavaliers stretched their lead to eight the score 20-12, which followed by a Virginia error and two back-to-back kills by Loessberg and Woods with the score at 20-15. After both teams went back and forth with points, it was the Cavaliers who stretched their lead sending them to a 30-20 win.

The Hurricanes jumped to an early 14-10 lead in game four. However, the Cavaliers rallied back to take their first lead at 22-21. The Hurricanes stayed within reach to tie the score back up at 22-all. But it was not enough as Virginia put up the next two points, forcing Miami to take a timeout down 24-22. Back in the game, Ciara Michel registered a kill to put Miami with one at 24-25, but the Hurricanes could not stop the three back-to-back Virginia kills and along with their own error sending the Cavaliers ahead at match-point 29-24. The Hurricanes tried to stay in the game with another two points. But Virginia went up with one last kill for the 30-26 game win and match victory.

UM will head out on the road for their final four regular season matches. They will travel to the state of North Carolina stopping first in Chapel Hill Friday, November 17 as they take on UNC at 8:00 p.m. They following day, Miami will head to Raleigh to face N.C. State at 6:00 p.m.