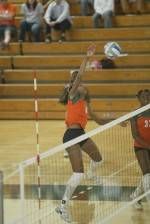 Senior Frannie Savage led the Hurricanes with 12 kills, giving her 378 on the season. She dished out six digs, and three blocks including one block solo.

Junior Ciara Michel dropped in 10 kills, two block solos and three block assists for a total of 132 blocks on the season. Sophomore Ashley Woods chimed in an impressive 10 blocks of her own with a .474 hitting percentage.

Jill Robinson controlled the pace of the assists as she posted 37 of Miami’s 44 assists. This now puts the senior setter at 1,042 assists for the season. She also contributed six kills out of only 10 attempts, and five blocks.

On Defense, sophomore middle blocker Angelica Ellis stepped up to lead all players with seven total blocks. She dished out two block solos and five block assists, giving her 44 total blocks on the season.

Freshman Cassie Loessberg also led all players on defense as she posted 10 digs. The libero also stepped up on the offensive end dishing out a match-high four kills.

Miami led the match in six categories beginning with 49 kills over the Hokies’ 44. The Hurricanes’ attack percentage overpowered their opponents, as they posted a .350 hitting percentage and Virginia Tech could only come up with .196. UM also came away with 44 assists, 40 digs, and 22 total blocks.

The Hurricanes will return tomorrow as they take on the Cavaliers of Virginia. Tomorrow also marks the final home match of the 2006 season, as four seniors, Frannie Savage, Jill Duncan, and Ann Gallo, will play in front of Hurricane fans at the Knight Sports Complex. The match is set to begin at 7:30 p.m.

Hurricane fans can tune in on the action this weekend as live coverage of tomorrow’s match will be provided through ACCselect.com and miami.accselect.com. The match can also be viewed on-demand.