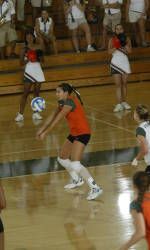 Senior Frannie Savage led all players with 20 kills, and contributed six digs along with one service ace.

“Frannie had a great match for us, and has had great matches this week”, commented head Coach Nicole Lantagne Welch. “She’s really starting to move the ball around more on the outside, and is really getting more comfortable and more confident with that.”

“It shows in [Frannie’s] results of how much she was definitely our go-to player, and made some big kills for us.”

Sophomore outside hitter, Lauren Rinderknecht posted her second career double-double, marking her first for the season with 10 kills and 10 digs. Senior setter Jill Robinson also registered a double-double with 47 assists, and led the Hurricanes with 14 digs. In addition, Robinson led the match with three service aces, while contributing six total kills.

Both teams put up close numbers, but the Hurricanes came out on top in four categories. Miami led the Demon Deacons with 68 kills, 58 assists, eight service aces, posted a .265 hitting percentage. Wake Forest out-blocked UM 17-10, and was one dig ahead of Miami with 62 total.

The Demon Deacons put game one out of reach early as they led 15-9. Two kills by Sara Duncan and an attack error by Wake Forest sparked a three-point run to put the Hurricanes within three, and forced Wake to take their first timeout. Miami came out with another scoring run, to tie the game 20-all off of a kill by Jill Robinson. UM took over after registering a kill by Savage and capitalizing on Wake Forest’s attack errors to capture the lead at 23-20. This forced the Demon Deacons took their second timeout. Miami stretched the lead 27-23 and pulled out the final three points to take the game 30-23. Both teams registered 18 kills apiece. Savage put up five kills while Robinson led the Hurricanes with 12 assists and four digs.

In game two, Savage continued her lead on offensive hammering six kills, as the team made the most of out of a balanced attack before pulling away late for a 30-27 victory. Miami led the entire match, and went on a six-point run by mid-way of the game, putting up four kills and gaining advantage off of Wake Forest’s errors at 22-14. However, the Demon Deacons responded with a seven-point run of their own to put the game within one at 21-22. Wake Forest rallied back to tie the game three more times. At 27-all, Frannie Savage helped to put away the Miami win with two intimidating kills, and Dylan Faulkner of Wake Forest could not tack on another point, but instead put up a bad set, to send Miami into the locker room with a 2-0 lead.

Game three proved to be the most competitive between the two squads as they posted eleven tied scores, and sparked five lead changes before the Demon Deacons went on to take their first win at 32-30, to trail the Hurricanes 1-2. Miami jumped out on top with an early 11-6 lead. Wake Forest managed to rally back to put the game within four 18-14, off of a kill by Lauren Peterson, which sparked a 5-0 Demon Deacons run that forced Miami to take their first timeout of the game. Back onto the court, Wake Forest tied Miami six consecutive times before taking their first lead at 24-23. Wake Forest brought their largest lead up by four points after they registered three kills and capitalized on two attack errors by Miami. By Match point 29-25 with Wake Forest in the lead, two kills and a service ace by Miami, along with two back-to-back attack errors by the Demon Deacons, forced the Hurricanes to rally back on a five-point run. UM regained their lead at 30-29. But two more attack errors off of Miami kept Wake Forest in the game, as the Demon Deacons registered a service ace to take the win.

“I am particularly glad of the way we came back in game three”, stated Lantagne Welch. “Despite the loss, we fought right to the end, and I think that gave us a lot of momentum going right into the fourth game.”

By the fourth game, Miami came out with a large lead and advanced to a seven point win at 30-23 and the match victory. Frannie Savage totaled five kills, followed by Lauren Rinderknecht with four. Miami posted an early 12-8 lead off of a kill by Savage set up by Robinson, sending Wake Forest back to the bench with their first timeout. By midway through, Miami stretched the lead by 20-13. The Demon Deacons managed to rally back to put the game within four at 21-17. However, a set put up by Ann Gallo triggered another kill by Frannie Savage that sparked a six-point run to put the Hurricanes ahead, 27-17. Wake Forest responded with three more points to send Miami this time to their bench with their final timeout. Rinderknecht came back on the court to take control with a kill, followed by a service ace by Savage, putting the Hurricanes at a match-point 29-20. But Wake Forest did not back down and posted another three points, to trail Miami 23-29. Jill Robinson quickly posted a set assists for Ashley Woods who came down with a strong kill, sending the Hurricanes on to advance to a 3-1 game win.

“What anchored this match for us was our passing”, said Lantagne Welch. “Our passers were outstanding, and they put us in a position to win.”

The Hurricanes will head back on the road as they take on the Terrapins of Maryland, Friday October 27. The match is set to begin at 7:00 p.m. at the Comcast Center Pavilion.