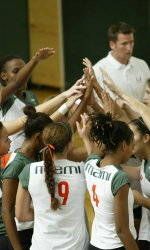 Miami went down in game one, but rallied back to take the last three games and the match victory.

“I’m extremely proud of the team’s effort”, said head coach Nicole Lantagne Welch. “The areas that we struggled in against Clemson yesterday in passing and defense, were our absolute strengths tonight.”

“We had a balance attack with a lot of people stepping up to put balls away for us.”

Senior Jill Robinson registered her sixth double-double of the season to lead the Hurricanes. Out of Miami’s 64 total assists, Robinson posted 55 assists while dishing out 13 digs. She leads the team with 533 assists (9.69 per game).

“Georgia Tech tried to stop Ciara by putting a lot of blockers on her, and she was still able to score for us”, commented Lantagne Welch. “It’s an attribute to the player she has become. I am pleased with how she finds more and more ways to score for us.”

“I thought Lauren did a good job swinging and attacking for us, and stayed persistent throughout the match.”

Defensively, Cassie Loessberg led the Hurricanes with 16 digs, and senior Ann Gallo posted 15 digs of her own.

Georgia Tech came out in game one leading the Hurricanes early with a 17-8 score, and never looked back. Miami tried to rally back, bringing the score within two at 22-24. But the Yellow Jackets pulled away and kept their lead by as much as three points, which then led the win at 30-27.

Miami jumped out to an early lead, taking Georgia Tech 13-5 in the second game and never looked back. The Hurricanes overpowered the Yellow Jackets, out hitting them .361 to .108 to go on to a 30-21 win.

Georgia Tech took an early 8-4 lead in game three before Miami came back to tie the score at 10 all. Both teams stayed within two points of each other and tied the score six more times. UM continued to carry the lead by as much as four points, with a 29-25 match point. The Yellow Jackets responded with a kill by Ulrike Stegemann, and a ball handling error by the Hurricanes brought the match point up to 27-29. But one last attack error by Stegemann allowed Miami to gain a 30-27 score and the win.

In game four, Miami came out with an early 11-8 lead before Georgia Tech posted five unanswered points to bring the score up 13-11, giving the Yellow Jackets their first lead. Georgia Tech kept their lead only by as much as two points, however, before Miami rallied back to tie the game at 20 all. The Hurricanes capitalized on the tie with a big kill by Ashley Woods, giving Miami their second lead. Both teams swapped points back and forth before another kill by Woods tied the game at 28 all. Two attack errors by the Yellow Jackets allowed Miami to take the game 30-28 and the match.

The Hurricanes will return to action Friday, October 6 at home, when they take on ACC foe N.C. State at 8:00 p.m. at the Knight Sports Complex.

Tickets are on sale through the Hurricane Ticket Office. Tickets are $5 for adults and $3 for children and senior citizens. Please contact the ticket office at 305-284-CANE.

Fans can follow all the action on the on the web with live scoring on www.hurricanesports.com.