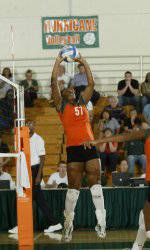 Hurricanes Go Down to Boston College in Five Games

“I think Ashley came in on the right side, and it was really good to see her step up tonight”, Lantagne Welch stated.

The Hurricanes came out posting the first score of game one, however, before trailing the rest of the way. BC (3-7, 1-0 ACC) led by as much as five points before Miami rallied back to put the score within one point at 13-14. The Eagles responded with a kill extending the lead, and never looked back, taking the game 30-24.

Game two saw seven tied scores right before the Eagles responded with the eighth at 10-all, but could not capitalize on their rally. The Hurricanes took advantage and registered a seven point run, and stretched the lead by seven points five different times before taking the win at 30-25.

Early in game three both teams battled to stay ahead before three kills by BC and an attack error by UM caused the Eagles to take the lead. Boston College continued to pile on the points, and extended their lead to eight points and the win at 30-22.

Both teams kept the score close and tied 14 times in game four, with Miami trailing the Eagles. The Hurricanes crept on the scoreboard putting the score within two at 27-29, right before going on a four point run at the end, to take the game 31-29.

In the final game, Miami tried to keep up with BC before the Eagles pulled away to make the score 11-9 and piled on five unanswered points, taking the game 15-9 and the match.

Disappointed with the lack of readiness in tonight’s match, Coach Lantagne Welch stated, “BC went after us, and instead of us being the team creating, we were the ones reacting”.

The Hurricanes will continue their ACC action Sunday afternoon as they take on Maryland at 1:00 pm at the Knight Sports Complex.