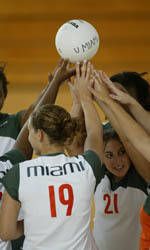 Miami Set to Face Two ACC Opponents for the Weekend

CORAL GABLES, Fla. (www.hurricanesports.com) – The University of Miami women’s volleyball team will face two ACC matches at home this weekend against Boston College and the University of Maryland. The Hurricanes will take on the Eagles Friday ay 8:00 p.m., before facing the Terrapins at 1:00 p.m. on Sunday. Both matches will be played at the Knight Sports Complex.

After coming from a disappointing loss in their first ACC match for the season against Florida State (7-3, 1-0 ACC), the Hurricanes (3-7, 0-1 ACC) look to bounce back with a vengeance after losing five game heartbreaker against the Seminoles Tuesday night.

Despite the loss, the Hurricanes posted outstanding stats complementing their intensity and drive throughout the match. Junior Ciara Michel played an outstanding match against the Seminoles, leading the team with a career high 19 kills, and three service aces. Michel ranks ninth in the ACC with a 1.15 per game blocking average.

Senior Sara Duncan posted her first double-double for the season with 13 kills and a career high 11 digs. Duncan was recently voted the University of Miami Muscle Milk Athlete of the week after posting 34 kills in two games against Jacksonville University (15) and Loyola Marymount (16).

Senior setter Jill Robinson also posted double figures with 48 assists and 13 digs. She is ranked eighth in the ACC with 9.74 assists per game.

Senior Francheska Savage contributed 17 kills, four digs, and posted a match high two blocks against FSU. Savage is also ranked fifth in both kills with 153 (3.83 per game), and 182.5 total points (4.56 per game) in the ACC.

Boston College: The Eagles head to Coral Gables with a 3-7 overall record and will commence their ACC play for the season against the Hurricanes. They are coming from a 3-1 win over Rhode Island, before going down their previous two matches to Towson and Seton Hall in the Rhode Island Invitational. In their last match, the Hurricanes swept the Eagles 3-0.

The Eagles post a .194 hitting percentage and a 2.44 blocking average as a team. They rank fifth in the ACC in both services aces with a 1.82 average, and digs with an average of 14.85 per game.Junior outside hitter Kelsey Johnson is ranked third in the ACC in kills with 136 (4.0 per game). She has recorded double-digits in kills in every match played this season, and is currently fourth in the ACC in total points with 156.5 (4.60 per game). Johnson was named to the All-tournament team in the Miami-Ohio Tournament, and leads her team in kills with 135 (3.97 per game).

Brittany Pierpont leads with 252 assists and is 10th in the ACC in assists with 251 (8.66 per game). Pierpont tallied 54 assists in a win over Rhode Island and was named to the Rhode Island VB Classic All-tournament team.

Allison Anderson enters the 2006 season ranked first on BC’s all-time list for the most digs in a single season, with 706 in 2004, and recorded 596 last season. Anderson earned first-team All-ACC honors in the team’s inaugural season in the league. The season, Anderson is fifth in the ACC in digs with 132 (4.12 per game) and eighth in service aces with 14 (0.44 per game).

University of Maryland: The Terrapins come to Coral Gables after going down to the Bruins of UCLA 0-3, falling to a 7-2 overall record. They finished last season 28-5 after they were defeated by Louisville in the second round of the NCAA tournament. Their ACC record is 0-0, as they will begin their conference play of the season against the Hurricanes. The last time the two teams met, Maryland defeated Miami in a five game battle.

Senior setter Teryn Papp leads with 189 assists, followed by Tedi Doucet with 177 assists. With 81 digs so far for the season, Beth Gillming averages 2.25 for the season.

Maryland currently has three players ranked in the ACC in blocks. Meredith Doyle ranks third in the conference with nine solo blocks and a 1.47 average. Katie Usher ranks fourth with a 1.46 average, while Mary Beth Brown averages 1.15 blocks per game and is ranked eighth.

Tickets for this weekend are on sale through the Hurricane Ticket Office. Tickets are $5 for adults and $3 for children and senior citizens. Please contact the ticket office at 305-284-CANE.

Fans can follow all the action on the on the web with live scoring on www.hurricanesports.com.