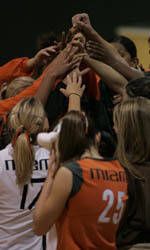 CORAL GABLES, Fla. (www.hurricansports.com) – The University of Miami women’s volleyball team wrapped up their final day of the Hurricane Invitational going down to Loyola 0-3, and finishing the weekend 1-3.

The final loss of the tournament puts UM at a 3-6 record for the season.

The energetic Hurricanes came out onto the court in game one against the Loyola Lions scoring back to back kills and led by as much as eight points. UM could not stop Loyola’s rally with a seven pint run, tying the game 28 all. Loyola took their first lead after a Canes error, bringing the score 29-30. After a final error by UM, the Lions took the win 31-29. Seniors Sara Duncan led the Hurricanes with nine kills, while Jill Robinson added 12 assists.

The Lyons jumped out to an early lead in game two, though Miami kept the score within three points. The Hurricanes came back close to the end to tie the score at 25 all. LMU pulled away to take the game 30-27. In the third and final game, Loyola posted a hitting percentage of .436. Miami was never able to gain a lead before the Lyons claimed the victory 30-24 and the match.

UM had a total of 50 kills, 45 assists, 42 digs, and a hitting percentage of .285. Senior Frannie Savage tied with a match high 15 kills, and earned all tournament.

“Jacksonville was a tough team to play,” said Head Coach Lantagne Welch. “They just never went away, and we were able to stay with that, fight it off, and pull it out, which is what I was proud of the team for.”

The Hurricanes jumped out to an early lead, taking the Dolphins 10-2 early in game one. Miami overpowered JU, out-hitting the Dolphins .211 to .026 to go on to win. In game two, both teams swapped points and posted 13 tied scores. UM trailed JU before tying the game 26 all, however Jacksonville pulled away to take the game.

Both teams battled for the lead early in game three exchanging points and tying eight times before Miami came away with the two point win. UM led game four scoring by as many as six points and taking the match. Sophomore setter Bridget Bomhack led the Hurricanes in game three with 11 assists and game four with 15 assists.

“Bridget came in and just did a really steady job at setter, and put us in a position to win”, coach Lantagne Welch commented. “We had a lot of people step up and it was fun to see.”

“Having Sara Duncan post double digits in attacks for us, in back to back matches was just awesome,” stated coach Lantagne. “Ciara Michel really raised her level of play this weekend. I’m excited to see her continue, and have her take it even further as we get into conference play”

The Hurricanes are back in action on Tuesday Sept. 19 at 8 p.m. as they get into ACC play against state rival, Florida State at the Knight Sports Complex.