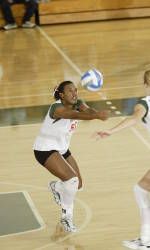 Volleyball To Play At Spartan Invitational

CORAL GABLES, Fla. (www.hurricanesports.com)- The University of Miami women’s volleyball team will head to East Lansing, Mich. this weekend to play in the Spartan Invitational at the Jenison Field House, Sept. 1-2.

The Hurricanes (2-1) will open against Eastern Michigan Friday at 4 p.m. On Saturday, Miami will play two matches, taking on Villanova at 11 a.m., followed by a match against tournament host Michigan State at 7 p.m.

Senior outside hitter Francheska Savage leads the Hurricanes in kills with 45 (3.75 per game) and was named all tournament at the Alabama tournament, while senior setter Jill Robinson leads Miami in assists (10.17 per game). Senior defensive specialist Ann Gallo leads in digs with 4.25 per game.

Next weekend the Hurricanes will be back home for their annual Alumni Match, Sept. 8 at 7 p.m. The following weekend, Miami will host the Hurricane Invitational at the Knight Sports Complex, Sept. 15-16. The tournament will feature matches against Florida A&M, Jacksonville, and Loyola Marymount. For tickets, contact the Hurricane Ticket office at (305) 284-CANE