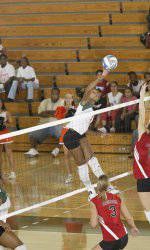 TUSCALOOSA, Ala. – The University of Miami volleyball team swept Alabama A&M 3-0 (30-12, 30-26, 30-17) in the team’s final game of the Academy Sports Invitational Saturday evening in the Coleman Coliseum on the campus of the University of Alabama.The Hurricanes dominated game one, downing the Bulldogs 30-12. With the score 10-7, Miami scored six straight points and were never contested.Game two, which saw the score tie ten times, was much more competitive. Both teams swapped the lead early on. The Bulldogs led by as many as four points with the score 20-16 late in the game. UM never trailed after breaking a 21-21 tie on a Genny Mayhew kill, and went on to win 30-26.

Both teams battled for the lead early in game three, exchanging the advantage and tying the game six times before UM went on a seven point run to take a 19-11 lead. The Hurricanes never relinquished the lead enroute to a match-clinching 30-17 victory.

“We bounced back, and were able to get our second win of the season, with almost everybody getting playing time, which is great”, said Head Coach Lantagne Welch.

Junior Ciara Michel led the team with a match high of 11 kills, while senior setter Jill Robinson posted eight digs. The Hurricanes dominated the offensive end of the match up, finishing with a .300 hitting percentage. “I felt Ciara Michel had a big match in the afternoon with her hitting and blocking. Kelsey Ream also made some nice adjustments that helped provide more offense out of the middle”, said Lantagne Welch.

Earlier in the afternoon, the Canes dropped their first match of the season losing in four games to the Kansas Jayhawks. The Hurricanes won game one 30-23, before dropping the next three games (30-28, 30-25, 30-23). Against the Jayhawks, senior Francheska Savage posted double digits in both kills and digs with 21 and 10 respectfully. Senior setter Jill Robinson added a match high 50 assists, while senior Ann Gallo contributed 25 digs. Coach Nicole Lantagne Welch stated, “I thought Ann Gallo was tremendous in the backcourt for us, while Frannie Savage shouldered the offensive load in the front row. We just couldn’t seem to find another consistent point scorer to compliment the job those two were doing.”

“Unfortunately we didn’t respond with the sense of urgency I would have liked to see. I commend Kansas for coming back at us harder and harder and putting the pressure squarely on us”, said Coach Lantagne Welch.

With the split, Miami’s record on the season is 2-1. Next weekend the Hurricanes are on the road again playing in the Michigan State Tournament. Miami will open play in the tournament playing Eastern Michigan at 4p.m. on Friday, September 1. The following day, UM will face Villanova at 11 a.m. and host Michigan State at 7 p.m.