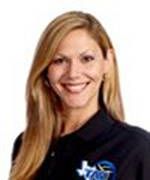 CORAL GABLES, Fla. – Head coach Nicole Lantagne Welch has announced the appointment of Yasmin Ortiz as an assistant coach with the University of Miami volleyball team. Ortiz comes to UM following a stint as the assistant coach at Dallas Baptist University and an impressive playing career in Puerto Rico.

“We are very excited to have Yasmin Ortiz join our hurricane volleyball coaching staff,” Lantagne Welch said. “She has been around volleyball much of her life and has a great passion for the sport. We are looking forward to having Yasmin bring her strong playing and coaching background along with her energy and enthusiasm into our program. She is a natural fit for us and is eager to put in the time and effort to help Miami Volleyball reach new heights.”

While assisting at Dallas Baptist, Ortiz has also served as the head coach of the TAV 17-2 Molten team. They took first place at the Presidents Classic in Omaha, Neb. and the Northeast Qualifier (NEQ) in Baltimore, Md., which qualified the team for the 2006 National Junior Olympics.

Ortiz was also selected as a coach for the USA High Performance Program over the summer.

In addition to Ortiz’s coaching background, she has also had a decorated playing career. Ortiz began playing volleyball in 1986 in her native Puerto Rico. After moving to Florida, she played volleyball at Taravella High School and led the team to their first state championship in 1990.

In 1992, Ortiz returned to Puerto Rico where she played four-seasons at the University of the Sacred Heart in San Juan. In 1996, after three consecutive second place finishes, Ortiz was part of Sacred Heart’s first Intercollegiate Athletic League (LAI) Championship.

From 1992 until 1997, Ortiz played for the Women’s Professional Volleyball League in Puerto Rico. In 1995, while playing as a middle blocker with the Volleygirls of Guayanilla, Ortiz was selected as a Top Ten Leader in Blocks and Top Ten Leader in Serve Aces. Ortiz was also selected to the Women’s Puerto Rico National Team in 1995 where she was part of the team that participated in the Pan American Games in Argentina.

Ortiz was likewise part of the beach circuit for three years during the summers while participating in the professional league and with the National Team.

Ortiz graduated from Sacred Heart in 2003 with a degree in biology. She currently finished her first year of graduate school where she is working on her master’s in education.

“I’m so excited to join the UM staff,” said Ortiz. “Growing up it had been an aspiration of mine to be part of the Hurricane program. It is a great opportunity to work along side Nicole and Matt [Botsford] and help continue the development of the program that we can all be proud off.”