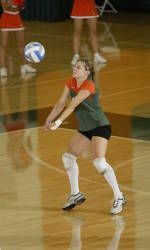 “I’m very pleased with the progress we have made this spring,” said head coach Nicole Lantagne Welch. “We’ve had a lot of individual growth in so many areas.  We are in the best shape as a team that we ever have been and we can see that directly by all the Miami strength and conditioning volleyball records that were broken this week.  Volleyball wise, every team member is now playing at a higher level which is exactly what you want to see after six weeks of training.”

Lantagne Welch was pleased with the way both Savage and Duncan played this spring, “Frannie really learned to become a better out-of-system high-ball hitter and how finesse will really enhance her game. I felt her blocking adjustments by our last tournament were huge in her progress. Sara’s offense has become so steady and effective for us.  She has really become a smarter player.”

“Ciara has made some nice improvements in both her blocking and her attacking,” said Lantagne Welch. “She is really taking out more area at the net now defensively and continues to hit the ball harder and harder.”

“I’m extremely proud of the changes Ann made and sustained this spring in her passing that have made her one of best-ever passers,” said Lantagne Welch. “Her serving has become a strong threat to opponents, making her serving rotation one of our strongest defensively.”

“Ashley’s hard work has had her noticeably improve all areas of the game,” Lantagne Welch concluded. “She is jumping higher, hitting harder and impacting the outcome on the court more and more.”