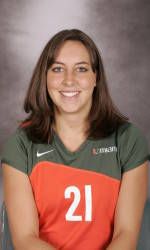 Kozak earned the Weaver-James-Corrigan scholarship which is given to selected student-athletes who intend to pursue a graduate-level degree following graduation. Each recipient will receive $5,000 to use towards his or her graduate education. Student-athletes receiving the award have performed with distinction in both the classroom and in their respective sports, while demonstrating exemplary conduct in the community.

Kozak, a Huntingdon, Pa. native, was a four-year letterwinner on the Hurricanes’ volleyball team. She ranks sixth all-time with 86 matches played and eighth with 249 games played. During her four years of play, Kozak collected 276 career digs, which ranks her 10th all-time. She holds the season record for service percentage (.982) and is second all-time with a .960 career serving percentage. Kozak also stands eighth all-time with 39 career service aces. Named a co-captain her senior year, Kozak dropped in a career-high 25 service aces as well as 146 digs in 2005. In 2004, she appeared in 81 games as a defensive specialist averaging 0.65 digs per game. She was also named to the 2004-05 ACC Academic Honor Roll.

The Weaver-James-Corrigan award is named in honor of the late Jim Weaver and Bob James as well as Gene Corrigan, all former ACC commissioners. The league’s first commissioner, James H. Weaver, served the conference from 1954 to 1970 after a stint as the Director of Athletics at WakeForestUniversity. His early leadership and uncompromising integrity are largely responsible for the excellent reputation enjoyed by the ACC today.

Robert C. James, a former University of Maryland football player, was named commissioner in 1971 and served for 16 years. During his tenure, the league continued to grow in stature and became recognized as a national leader in athletics and academics, winning 23 national championships and maintaining standards of excellence in the classroom.

The 44 student-athletes will be honored April 13, 2006, in Greensboro, N.C., at a luncheon hosted by the Nat Greene Kiwanis Club. The luncheon will be held at the KouryConvention Center.