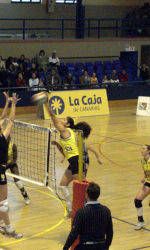 Hurricanesports.com caught up with former Miami volleyball standout and Honorable Mention All-American Valeria Tipiana. Tipiana, who graduated as Miami’s all-time kills leader, is currently playing professionally as a rightside hitter for MasPalomas Team in the Canary Islands in Spain.

How did you get involved with the team in Spain?
It’s funny at the beginning I thought I was going to go to Italy, and I did for a week and a half, but things weren’t what I expected. Then I got call to go back to Peru and play a couple of tournaments for the national team. While I was in Peru one of my teammates that is currently playing in another Spanish team asked me if I was interested in playing in Spain and I said sure why not. After that the assistant coach of the MasPalomas team called me and asked me to send some videos that the coaches put together. It seems that they liked it since I’m here.

What is it like to play volleyball professionally?
It’s really nice and different not only because you get paid but also because of the way of living, the level of competition and the expectations that people have for you. Coaches put a little more pressure on you and there’s constant competition since everyone is a really good player especially in this league.

What other teams do you play? Do you have leagues and championships?
There are many leagues. There’s the First Team, Second Team, Liga FEV and Super Liga. I play in Super Liga which is the best in Spain. In this league there are 14 teams of whom only the top eight get to play in the championship. Also in the middle of season which ever team is in the top eight get to play in another big tournament.

Do you travel to other parts of Europe?
No I don’t. This year only three teams in this league do and they are among the best.

How does playing professionally compare to playing at Miami?
It’s pretty similar with a little more of tension since now it’s your job and you can’t really mess up but there are tons of good moments and fun as well. The level of competition is tougher but like playing at Miami we travel a lot to different cities of the country which is something I like a lot.

How playing at Miami helped you in your professional career?
I think it has especially with the traveling situation since it’s very similar. You play some home matches and others on the road and we take bus and plane just like in college which I didn’t experience in Peru since you only travel for international competitions which are pretty short. Also playing at Miami helped me with the whole idea of living by myself though I still had my parents around. Now I’m by myself in a different country once again.

Playing at Miami made me grow up as a player since I was pretty young when I started college and had to learn many things. There where many things that I needed correct and get stronger which I think I did, plus it gave me more experience.

How often do you play? How long is your season?
We play every weekend and sometimes on weekdays. We have to be here in August to start preseason training and we end around April if you don’t make it in the playoffs, if you do you have to stay until end of May to early June.

Have you been able to adjust well to living in another country?
Yes. I think it’s been much easier than adjusting to living in the US since I don’t have the language barrier, plus I’m older and I already had the experience of what it is to live in a different country.

What interesting things have you learned while living in Spain?
Well something really interesting about Spain and that surprised me is that there’s what’s called a “Siesta” which is between 2:00 and 5:00 in the afternoon. Everything closes so everyone can take a nap or relax for a while. It’s amazing all the streets are empty. Also all stores and restaurants except for a few ones close on Sundays as well. It’s as if the island is dead.

Another funny thing that I learned is to drink coffee. I was never a coffee drinker and now I’m so into it, it’s an essential after every meal.