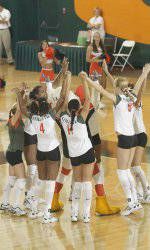 Looking Back at the 2005 Season

The 2005 Miami volleyball team came into the season filled with high expectations, strong senior leadership, and a solid of mix of unproven youthful talent. The 2005 season ended with significant individual milestones achieved, big victories, and grand hopes for the future.

Miami closed its second season in the Atlantic Coast Conference with an 11-11 record and a 16-14 mark overall.

“Overall we had hoped to do better this year, but we were young,” said head coach Nicole Lantagne Welch. “I think we gained on-court experience tremendously throughout the year and we had some great things happen. “

Miami then welcomed Michigan State, Sacramento State and Louisville for the Orange and Green Challenge. Unfortunately, the Hurricanes were defeated in all three matches, including an excitingly close four-game loss to then ninth-ranked Louisville. Johnson represented the Hurricanes on the All-Tournament team.

Miami’s heartbreaking loss to Louisville ended its non-conference slate and began a period marked by a bit of inconsistency. As the season progressed and Miami opened Atlantic Coast Conference play, the Hurricanes were up and down, never quite able to string together two victories in a row.

“I think in the first half of the season, if something went bad confidence would drop quickly, and I think later in the season, people wouldn’t let certain things bother them as much,” Lantagne Welch said.

“That’s where we had growth and I think that was our biggest hurdle, sometimes mentally we would let a couple of points affect us too much instead of just bouncing back. That was our Achilles’ heal–inconsistency in all areas of the game.”

Nevertheless, Miami was still able to fine success during that difficult stretch. The Hurricanes opened their second season in the ACC with a three-game sweep over Boston College and claimed a five-game victory over Clemson. Miami then matched up against rival Florida State, and after dropping a hard-fought first game, rallied to sweep the next three games for the victory in Tallahassee.

“That’s a tough place to play, as with any Miami team, it’s a huge rivalry. It was great to go to their house and get a win,” said Lantagne Welch.

The season took a swift turn after another three-game win over Boston College. Afterward, Miami traveled to Atlanta to face perennial power Georgia Tech. In what proved to be the turning point of the season, the Hurricanes swept the Yellow Jackets, avenging a five-game loss earlier in the season.

“That was a fun, high-level volleyball match,” noted Lantagne Welch. “That match was great for us. We had been in a lot of matches all season and had lost points that cost us matches. It was a match where we won the big points when we had to. We were very clutch.”

“That was a turning point for us,” she continued. “We made a big step up in our mental and physical game in that match.”

The victories at Boston College and Georgia Tech launched a 6-4 stretch that included a three-match winning streak. Miami’s season-ending run was highlighted by victories against North Carolina and Wake Forest where the Hurricanes played their best volleyball.

In a match at the Knight Sports Complex, the ACC-leading Tar Heels took a two game lead before the Hurricanes battled back, winning games three and four to force a fifth game. In game five, Miami scored 14-straight points en route to a 15-2 fifth game win and stunning victory over the eventual conference champions.

“To be down 0-2 and come back to dominate games four and five against the team that wins the conference, said a lot about where we came late in the season,” Lantagne Welch said.

How far the team had come showed in the team’s final victory of the season, where they swept Wake Forest at home.

“I think that was our very best match of the year. We clicked on all cylinders. That was just a fun match to be a part of. That was the one match that we put it all together very well from start to finish,” noted Lantagne Welch.

Though the team had its ups and downs, Lantagne Welch noted that the one thing they never did was give up, “One characteristic this team had was a great deal of fight, it didn’t matter what match we were in, we were always battling.”

This was emphasized in the last match of the season against Duke. Down two games to none, the Hurricanes rallied to take game three, and gave the Blue Devils a hard fight before bowing out in four games.

“We prevailed in some matches, and in some we fell short but we were able to put together strings of points and be phenomenal, but that was our downfall–being inconsistent in our levels of play.”

The biggest story of this season individually was the stunning brilliance of senior outside hitter Karla Johnson.

“I never dreamed she would be an outside hitter and to have her come and dominate that position has been awesome to see,” said Lantagne Welch.

This season, the former middle blocker became Miami’s most prolific outside hitter, setting the career kills mark (1,484) while also setting the record for kills in a season (616) and kills in a match (31). Johnson ended her career at Miami as the all-time leader in total blocks, block assists and solo blocks.

“It gave everyone a sense of comfort knowing we had a go-to player, a player that was always to be counted,” added Lantagne Welch.

Savage put up solid numbers, posting the second most kills in a season by a Hurricane, 483, and leading the team with a .307 attacking percentage. The game that really showcased Savage’s ability, however, was the fifth game in UM’s comeback win over North Carolina. In that game Savage went a perfect 5-for-5, accounted for seven points and fittingly scored the match-clinching point.

Savage was likewise named an AVCA Honorable Mention All-American and AVCA All-East Region selection. She was also named to the All-ACC Second-Team.

“Frannie’s really taken her game to a new level,” said Lantagne Welch. “She would just take over, like in the match against North Carolina. She’s had some phenomenal matches, some game-changing matches–especially as an attacker. She is a feared attacker in this conference.”

While Johnson and Savage where the focal points of Miami’s offense junior setter Jill Robinson wielded the offense to ensure that the ball got to the Hurricanes’ best attackers. In 2005, Robinson, one of Miami’s most productive players, continued to add to her legacy. Surpassing the 3,000 career milestone, Robinson now holds the record for career assists, 3, 715, and assists in a season with 1, 507 in 2005.

Robinson’s 12.45 assists per game ranked her fourth in the ACC. She was also third on the team with 2.63 digs per game and fourth with 26 service aces.

“Her setting continues to improve with every season, ” noted Lantagne Welch. “She has a better grasp of running our offense and making us better.”

Another key component to the Hurricanes’ success this year was the emergence of the blocking pair of redshirt sophomore Ciara Michel and freshman Angelica Ellis.

“Angelica really stood out at the end of conference play,” Lantagne Welch said. “It was exciting to see her work so hard. The neat thing about it was to see it bring out Ciara Michel as well. Ciara had a great final match. I’m really excited to see them push each other in the future.”

Michel’s performance this season was expected from last years results, but she shone much more brightly, setting team match records for solo blocks (5) and tying Johnson for the solo blocks in a season record (27). Michel finished the season ranked fifth in the ACC with 1.24 blocks per game.

Ellis, conversely, was a pleasant surprise as she tied Michel’s record for solo bocks in a match and made her way into the starting lineup.

“Early in the year she [Ellis] was a little over her head, which is fine because as a freshman you’re just trying to learn everything,” said Lantagne Welch. “We didn’t project to see her out there but she just continued to battle and do work and suddenly she found herself out there on the court just playing with confidence and without fear. I think that was a really exciting welcome to see her come on that quickly.”

Defensively the team was led by junior libero Ann Gallo, who led the team in digs (3.78), and chipped in the second highest total of service aces (31).

Senior Kaitlin Kozak also contributed, as she filled her role as defensive specialist and dropped in a number of service aces.

“Ann continued to improve. I know she gained confidence the more she was out there. Kaitlin accomplished a lot this season and finished strong,” said Lantagne Welch.

Sophomore Michelle Bruin, thanks to her good passing, saw a significant amount of playing time. “Her passing steadied out. We believed in her and she believed in herself and she got better as the season went on,” Lantagne Welch noted.

Also chipping in were redshirt freshman Ashley Woods, freshman Lauren Rinderknecht and junior Sara Duncan. According to Lantagne Welch, “They were able to get out there and get that experience and they’ll just continue to grow.”

Lantagne Welch did not fail to note the immense contributions of her two departing seniors, Karla Johnson and Kaitlin Kozak, “They were both great people with great work ethic and they were great leaders for our program. We’re sad to say goodbye to them but we’re very proud of what they’ve done for our program.”

Growing is the best word to describe the 2005 season and the players that will take the court next year. After graduating five seniors, including four starters from the 2004 season, the Hurricanes relied heavily on underclassmen. Though there were some growing pains, Lantagne Welch is confident that the lessons learned will not only help the team in the future but ensure success to a still developing program.

“We were a young team this year, but have a lot to look forward to,” said Lantagne Welch. “We have exciting recruiting classes coming in. We are getting great commitments from incredible players who will make huge strides in our program. We need to build on what we started. I think the future is really bright and these players have set a high work standard. They want to get better and play at the highest level possible.”