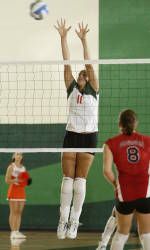 Miami (13-12, 8-9 ACC) returns to the court after splitting matches against Virginia Tech and Virginia this weekend. The Hurricanes defeated the Hokies, 3-1, Friday before falling to the Cavaliers in three games the following evening.

Johnson’s 5.18 kills per game has placed her atop the ACC for 12-straight weeks. She also leads the team with 23 solos blocks and 37 service aces. Robinson, Miami’s all-time assists leader, is averaging 12.59 assists per game while Savage is second on the team with 3.88 kills per game and the team-leader with a .296 hitting percentage.

Defensively, the Hurricanes rely on libero Ann Gallo and middle blocker Ciara Michel. Gallo has registered a team-best 362 digs for a 3.66 digs per game average. Michel leads Miami with 1.19 blocks per game; 115 total.

As a team, the Hurricanes are hitting .217 while holding their opponents to .206 hitting percentage and 15.1 kills per game.

The Seminoles head into Coral Gables having won four of their last six for a 9-16 overall record and a 7-10 mark in ACC play. Like Miami, FSU fell to Virginia (3-2) before defeating Virginia Tech (3-0).

In their last outing against the Seminoles, the Hurricanes came out on top with a 3-1 victory in Tallahassee on Oct. 11.

Florida State is led by Andreza Santos who is knocking down 3.32 kills per game and hitting .284. Lauren Scott if averaging 1.11 blocks per game and Jessica Skower is dishing out 8.86 assists per game. Defensively, the Seminoles are led by Summer Weissing’s 4.45 digs per game.

As a team, the Seminoles are hitting .190 while holding opponents to the same percentage. They are also averaging 2.70 blocks per game.

The match will be broadcast live on www.wvum.org and can also be followed on the web through live scoring on www.hurricanesports.com.

Tickets are $5 dollars for adults and $3 dollars for children and senior citizens. For more ticket information please contact the Hurricane Ticket Office at 1-800-GO-CANES.