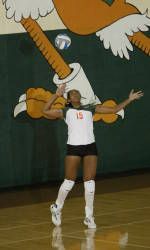 Senior Karla Johnson and junior Jill Robinson paced the Hurricanes offensively. Johnson knocked down a match-high 27 kills to go along with 16 digs and two solo blocks, while Robinson led all players with 53 assists and added 10 digs of her own.

Both teams exchanged points to open the match but the Hokies tallied three-straight points to take a 13-12 lead. Miami then capitalized on four consecutive attacking errors to take a 16-14 lead that they never relinquished for a 30-25 victory.

The Hurricanes led for most of game two until the Hokies used a nine-point run to jump ahead 27-22. Miami answered by scoring five of the next nine points, but could not make-up the difference as Virginia Tech held off the threat to claim a 30-27 win.

Game three was all Miami as the Hurricanes held the Hokies to a .026 hitting percentage while hitting a match-high .342 to run away with a 30-17 victory for a 2-1 match lead.

Game four was the closest of the match as both teams exchanged points until Savage knocked down two kills to give the Hurricanes a 7-5 lead. Miami held that lead for most of the match until Virginia Tech tied the score at 24-all. The Hokies took the lead with the score 25-24, but the Hurricanes countered with four-straight points to jump ahead 28-26. Miami claimed the last two points to take a 30-26 win and the match victory.

Allie Kupec led the Hokies with 16 kills while Amanda Cloyd led all players with 21 digs.

The Hurricanes return to action Saturday against Virginia in Charlottesville. Match time is set for 8:00 p.m.