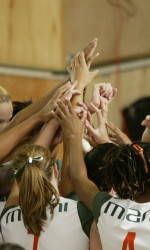 CORAL GABLES, Fla. – The University of Miami volleyball team will host Clemson and Georgia Tech this weekend at the Knight Sports Complex. The Hurricanes will face Clemson on Friday at 7:00 p.m. in their Atlantic Coast Conference home opener before taking on Georgia Tech Sunday at 1:00 p.m.

Last weekend, the Hurricanes (6-4, 1-1 ACC) spilt a pair of ACC matches–a three-game sweep over ACC newcomer Boston College and a 3-1 loss to Maryland.

Leading the way for the Hurricanes is senior outside hitter Karla Johnson, who has led the ACC in kills per game (5.34) for four consecutive weeks, and junior setter Jill Robinson, who is fourth in the ACC with 11.76 assists per game.

Defensively, Miami is led by junior libero Ann Gallo’s 4.05 digs per game average–ranked ninth in the conference–and redshirt-sophomore middle blocker Ciara Michel, who has posted a team-high 36 block assists for a 1.05 blocks per game average. Michel enjoyed one of the most successful offensive performances of her career last weekend. She knocked in 7-of-11 kills without committing an error for a match-high .636 hitting percentage at Boston College. Against Maryland, Michel registered a career-high 14 kills to go along with a team-high five block assists.

Clemson: The Tigers claimed a pair of conference victories in the first weekend of ACC play to improve to 7-3 overall and 2-0 in the ACC. Clemson rallied from a 2-1 deficit to claim a five game victory over Wake Forest before downing Duke 3-1.

Leading the way for the Tigers is freshman Jeanette Abbott, who was tabbed ACC Player of the Week after she averaged 5.11 kills and 1.78 digs per game in Clemson’s first two ACC matches. Abbott is hitting over .300 over Clemson’s nine matches and is third in the conference with a 4.65 kills per game average. Danielle Hepburn set a freshman record with 12 total blocks against Duke and is ranked sixth in the ACC with 1.38 blocks per game.

The Tigers lead the all-time series against Miami, 2-1. In their only meeting last season, Clemson downed the Hurricanes 3-0 at Clemson.

Georgia Tech: After reaching the Sweet Sixteen for the second year in a row last season, the Yellow Jackets are off to a slow start in 2005. Currently 4-6 overall and 1-1 in the ACC, the Jackets defeated Wake Forest 3-1 after falling to Duke in four games last weekend.

The loss to Duke snapped Georgia Tech’s 21-match ACC win streak that dated back to the 2003 season. The loss also marked the first conference loss in the Jackets’ O’Keefe Gym since the 2002 season.

Georgia Tech is led by senior setter Lindsay Leband, who is ranked third in the ACC with a 12.00 assist per game average, and Talisa Kellogg, who leads the team in kills (120) and kills per game (3.53). Defensively, Jennifer Randall leads Georgia Tech with 4.43 digs per game.

The Yellow Jackets defeated the Hurricanes, 3-0, last season in their first ever meeting.

The match against Georgia Tech will be broadcast live on WVUM 90.5 FM and can also be found on the web at WVUM.orgwww.wvum.org. Fans can follow both matches via live scoring at hurricanesports.comwww.