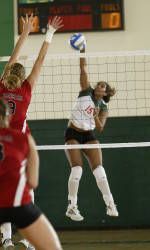 Miami heads into ACC action with a 5-3 overall record after winning two-of-three non-conference tournaments including both the Houston and Hurricane Invitationals. The Hurricanes come off a tough Orange & Green Challenge where they fell to Sacramento State, Michigan State and showed promise in a four-game loss to ninth ranked Louisville.

Leading the way for Miami is senior outside hitter Karla Johnson, who is hitting an ACC-best 5.45 kills per game that also ranks her seventh in the nation. Last weekend, Johnson reached a career milestone when she became only the third Hurricane to surpass the 1,000 career kills mark. The Houston, Texas native is now ranked second all-time with 1,037 career kills behind former standout Valeria Tipiana, who holds the record with 1,411 kills.

Junior Jill Robinson continues to work her way to the top of the ACC. Miami’s starting setter is now ranked third in the league with 11.52 assists per game.

Fellow junior Ann Gallo and redshirt sophomore middle blocker Ciara Michel made their debuts among the ACC leaders. Gallo, Miami’s starting libero, is ranked seventh with 4.10 digs per game while Michel is averaging 1.13 blocks per game, good for ninth in the ACC.

Boston College:The Eagles opened conference action on Tuesday, with a 3-1 loss to Maryland in their inaugural ACC content to fall to 5-5 on the season and 0-1 in the ACC. Miami’s former BIG EAST foe, opened its season with loses in its first two matches before defeating Maine in the BC Invitational. The Eagles faired better at the New England Challenge where they took two out of three matches.

Allison Anderson leads the team with 16 aces. Her 0.53 ace per game average is fifth in the league. She is also ranked third in the ACC with 4.88 digs per game. Leading BC offensively is Dorota Nienczewska, who is averaging 3.53 kills per game.

As a team, the Eagles are ranked second with a 16.62 ace per game average and sixth with 1.69 digs per game.

The Hurricanes swept the Eagles, 3-0, at the Knight Sports Complex in the last meeting between the teams on October 5, 2003.

Maryland:The Terps (10-0, 1-0 ACC) are off to their sixth best start in school history, winning ten in a row after taking the ACC Championship and reaching the second round of the NCAA Tournament last season. Maryland claimed the Courtyard by Marriott Ft. Meade Invitational as well as the Pittsburg Invitational and the Rose Hill Classic before claiming a 3-1 victory over Boston College in its ACC season opener.

The Hurricanes last faced the Terps in the quarterfinal round of the ACC Championship where the Terps topped Miami 3-1 en route to their second title in as many years.