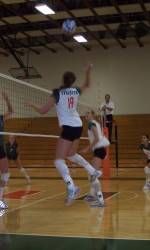 CORAL GABLES, <?xml:namespace prefix=”st1″ ns=”urn:schemas-microsoft-com:office:smarttags”?>Fla. – The University of Miami volleyball team capped off their preseason training with a 3-0 win over the alumni in their first-ever alumni match Saturday afternoon at the Knight Sports Complex.<?xml:namespace prefix=”o” ns=”urn:schemas-microsoft-com:office:office”?>

“Overall I was very pleased,” said head coach Nicole Lantagne Welch. “It was fun to go against some of our former players and see them on the court again. It was great to have them here.”

“I thought we got great matches from Frannie and Karla,” noted Lantagne Welch. “They definitely took on the offensive load and ran with it. But Jill did an excellent job of running the offense and really picked up the tempo in her sets and it made our hitters very effective.”

“Kaitlin did a great job with her passing. Ciara [Michel] had a great game one but really responded to finish the match strong. That was really nice to see the turnaround within the match.”

They were led by Santaella Sante who tallied nine kills, James who dished out 22 assists and Gamarra who tallied 11 digs.

“There are some things that we can see that we need to work on,” concluded Lantagne Welch. “But we keep on getting better each week and that’s the key because we play in one week.”

The Hurricanes open the season at the Houston Tournament September 2-3. They will face ArkansasState on Sept. 2 at 5:00 p.m. (CST) in their first match of the 2005 season.