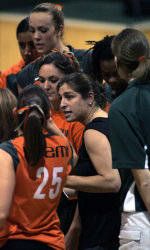 Hurricane Volleyball Geared Up for 2005 Season

CORAL GABLES, Fla. – After breaking new ground in 2004 in their inaugural season in the Atlantic Coast Conference, the 2005 Miami volleyball squad hopes to build upon their second place finish in the final league standings to contend for the ACC championship and a trip to the NCAA Tournament.

The Hurricanes return eight letter winners, including four starters, and add four newcomers to the fold. Though young, the talented and strong team will be led by veteran starters including senior outside hitter Karla Johnson, junior setter Jill Robinson and redshirt junior middle blocker Frannie Savage.

“I think that we have a great team coming back,” said head coach Nicole Lantagne Welch. “They get along very well and work hard together. This group is very hungry. They’re hungry to prove themselves and are very capable of rising to any challenge. We have some extremely gifted athletes and some solid players. When we mix them all together it could be excellent.”

The Hurricanes will have to fill the void left by the departure of five seniors including AVCA Honorable Mention All-American Valeria Tipiana, who graduated as the all-time career leader in seven categories including kills and attack percentage.

“Jill is comfortable at running the team and really taking our offense to a new level. Frannie and Karla will be our big guns and should shoulder the load of Valeria being gone.”

Lantagne Welch remains confident, however, that the 2005 squad will excel and continue to make strides in only the programs fifth year.

“We’ve progressed every year and we’ve had a better team each year. We did lose a fair amount of players and in some aspects we’ll be young, more so on court experience, but we continue to get stronger athletes and this will be our strongest team yet.”

The Miami squad began preparations for the 2005 campaign after reporting to campus on Wednesday, August 10th. The new squad will first play together on Saturday, August 27th at 3:00 p.m. when they face returning players in an alumni match.

The Journey to Success

The 2005 season will see a reconfigured ACC schedule that will forgo the ACC tournament and a adopt a double-round robin schedule where all 11 teams will play one another both at home and away. This new schedule will establish a true ACC Champion.

“The double-round robin is going to be extremely competitive,” said Lantagne Welch. “But I think that it’s very good for our conference. We’ll establish great rivalries, be able to play everyone at home and on the road and have a true conference champion based on the results of the season. It’ll be fun to be able to play everyone twice and make adjustments between the matches.”

The Hurricanes open the season on the road in the Houston Tournament. There, Miami will face tournament host Houston, Arkansas State and Ole Miss of the strong South Eastern Conference (SEC).

“Opening at the University of Houston is great because it’ll be Karla [Johnson]’s senior year and she’ll get to play in her home town,” said Lantagne Welch.

Miami then returns home for the first of two home tournaments. The Hurricane Invitational will take place from September 9th and 10th and features Tulane, Xavier and Jacksonville State.

The Hurricanes, who were picked to finished fourth in the ACC Preseason Coaches Poll, open their ACC slate at Boston College on September 23rd before heading to College Park for a match against ACC Tournament champion Maryland on September 25th.

The following weekend the Hurricanes return to Coral Gables for a two-match homestand against Clemson (Sept. 30) and Georgia Tech (Oct. 2). Georgia Tech finished the season ranked 17th in the final USA TODAY/CSTV Top 25 Coaches Poll after reaching the Minneapolis Regionals during the NCAA Tournament.

The Hurricanes then have back-to-back matches at NC State (Oct. 7) and North Carolina (Oct. 8) before their Tuesday night match-up at Florida State on October 11th.

Miami hosts two matches against Virginia (Oct. 14) and Virginia Tech (Oct. 16) before facing Duke on October 21st. The Blue Devils were projected to finish first in the 2005 ACC Volleyball Preseason Coaches poll. The Hurricanes then travel to Wake Forest on October 22nd prior to another weekday match against instate rival Florida State on October 25th. The following weekend Miami will host Maryland and Boston College on October 28th and 30th, respectively.

The Hurricanes travel on consecutive weekends, first to Georgia Tech (Nov. 4) and Clemson (Nov. 5) and then to Virginia Tech (Nov. 11) and Virginia (Nov. 12), for their final road swing.

The Hurricanes will have the anchor in their offense in junior Jill Robinson. In only her second season with Miami, Robinson became the first player in program history to surpass the 2,000 career assists mark, tallying 2,208 by season’s end. The Merced, Calif. native averaged 13.38 dishes a game, good for second in the ACC and 16th in the nation, and registered a record 1,244 assists on the season.

In 2004, Robinson also showcased her defensive skills when she recorded a team-high nine double-doubles, averaging 2.45 digs per game.

“Jill has two years of experience under her belt and you really see her taking our offense to new levels. We are excited about the strides that she has made,” said Lantagne Welch.

Joining Robinson will be freshman Bridget Bomhack who will play a back-up role. A native of Waukesha, Wis., Bomhack is a First-Team All-State selection and the Classic 8 Conference Player of the Year.

“Bridget brings depth to our setter position,” said Lantagne Welch. “Coming from a volleyball family where both siblings played in college, she has been around the game for years and her experience shows in her play. Bridget has great setting instincts, combined with a strong block and great court personality.”

Preseason All-ACC selection Karla Johnson leads the outside hitters after making the move from the middle last year. Johnson was second on the team in total kills (365) and averaged 3.76 kills per game.

“Karla continues to improve on the outside after making the switch last season. She is one of our go-to attackers in both the front and the back row,” said Lantagne Welch.

The Hurricanes will also look to junior Sara Duncan and sophomore Michelle Bruin for offensive production.

Redshirt freshman Ashley Woods and newcomers Lindsay Fletcher and Lauren Rinderknecht will also compete for a spot on the outside.

“We have a couple positions that several people will be fighting for,” noted Lantagne Welch. “We’ve come to have that every year and that’s healthy. I think that between the outside and right side positions, Sara, Ashley, Michelle, Lauren and Lindsay will all be challenging to get those spots.”

“Frannie is coming off her most impressive semester where she really raised her level of play. We expect her to be a go-to player for us.”Michel became a dominant force in the middle for Hurricanes in 2004 after redshirting her freshman season. She finished the season as the team leader in every blocking category. Here 1.45 blocks per game average placed her third in the ACC and 35th in the nation.

“Ciara had a great freshman season. We look for her to improve and become more active offensively.”

Joining Savage and Michel will be freshmen Lauren Rinderknecht and Angelica Ellis.

“Lauren is an extremely solid all around player and athlete. She is a student of the game and it shows with her results. Her teams always seem to overachieve, largely in part to her contributions. Lauren’s strong work ethic and desire will help her contribute significantly throughout her career. She is one of the most versatile players to become a `Cane which means she’ll be utilized as a middle, outside and rightside.”

“Angelica is an incredibly quick athlete in the middle. She has great feet and agility, allowing her to cover the net from antenna to antenna. Her athleticism allows her to punish the ball on a regular basis.”

This season, the Hurricanes will look to senior Kaitlin Kozak and junior Ann Gallo to challenge for a starting spot in Miami’s back row.

“Ann and Kate are in excellent shape for challenging for Libero position. I think that we have two very capable people stepping into that role.”

Kozak appeared in 81 games in 2004 averaging 0.65 digs per game and registered a career-high 10 service aces.

“Kate continues to be steady in the backcourt. She adds a lot of balance with her passing and defensive combination. She is also one of the best servers on the team.”

Gallo saw an increased role in the UM lineup as a defensive specialist and totaled 80 digs on the season while averaging 1.33 digs per game.

“Ann had a great spring. She’s an outstanding defender and is becoming one of our best passers.”