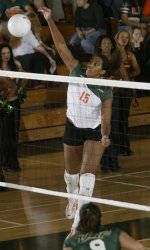 CORAL GABLES, Fla. – University of Miami senior outside hitter/middle blocker Karla Johnson was named to the 2005 Preseason All-ACC Volleyball team while the Hurricanes were picked to finish fourth in the Preseason ACC Coaches Poll, it was announced on Wednesday.

As voted by coaches from around the conference, Johnson drew Preseason All-ACC accolades after an impressive 2004 campaign that saw her finish second on the team with a career-high 365 total kills and a 3.76 kills per game average as well as 31 total service aces. The Houston, Texas native posted the team high for kills in nine matches during the season.

“Karla certainly deserves the recognition,” said head coach Nicole Lantagne Welch. “She had a great junior year where she was a consistent force for us and I’m confident that she will have an even better senior season.”

“I’m very surprised that she was the only member of the team picked. I’m sure that the players that were left off will happily prove to the conference that they should have been on the list.”

The Hurricanes were picked by coaches to finish fourth overall out of the 12 team field. Miami finished second in the final standings of the 2004 season after posting an 11-5 conference mark and a 17-9 overall record.

“I’m not surprised that we were picked to finish fourth. Polls are fun to look at but we know from experience that the important thing is how we do on the court and where we are at the end of the season.”

“The ACC is a very competitive conference,” continued Lantagne Welch. “Every team can and will compete for the championship and I’m looking forward to that.”