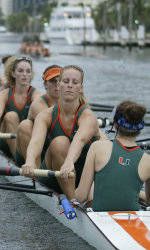 CORAL GABLES, <?xml:namespace prefix=”st1″ ns=”urn:schemas-microsoft-com:office:smarttags”?>Fla. – The Atlantic Coast Conference declared the University of Miami rowing team as one of 11 teams to receive an ACC Spring Sportsmanship Award, it was announced Wednesday. Teams receiving the award have conducted themselves with a high degree of character and good sportsmanship, as determined by a vote of the league’s teams.

“This award really means a lot to our team as it recognizes some of the most important aspects of organized athletics: integrity, character, honor, and respect,” said head coach Debra Morgan. “I am certainly very proud of our team’s conduct this past season. I think stepping up into the ACC is bringing out excellence on a variety of levels from our athletes.”

The conference presents sportsmanship awards for each of its 25 sponsored sports. The concept of these awards was created by the ACC Student Athlete Advisory Committee in an effort to recognize teams who earned the utmost regard from their peers during competition. As is stated in the conference’s Mission Statement, “It [the ACC] strongly adheres to the principles of integrity and sportsmanship, and supports the total development of the student-athlete and each member institution’s athletics department staff, with the intent of producing enlightened leadership for tomorrow.”

Recipients of the spring awards are as follows: