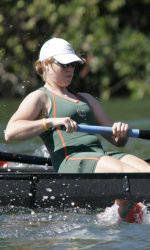 CORAL GABLES, Fla. – The University of Miami rowing team will travel to the ninth annual Aramark Central/South Region Championships that will take place Saturday, May 14th through Sunday, May 15th on Melton Hill Lake in Oak Ridge, Tenn. The Hurricanes will compete in the Open 4+, Varsity 4+ and the Varsity and Junior Varsity 8+.

Racing will take place throughout the day with opening heats beginning in the morning at 9:00 a.m. and semifinals finishing up in the mid-afternoon. The finals of the races will be held Sunday, starting at 9:00 a.m.

“I’m very pleased with the performance of the Varsity 8+ as we head into our last race of the season,” said head coach Debra Morgan. “We have a very young crew that has really grown and progressed through the last few months. It’s a very fast year for our region so our young crew is pushing very hard to stay competitive. They’ve done a nice job handling their situation and I’m satisfied with what we were able to accomplish so far this year.”

The South/Central Region Championship event is the only regatta of its kind in the NCAA, and the competition is relegated to intercollegiate programs that compete in either the Central or South Region. Totaling 29 teams, the Central and South Regions are comprised of squads from Tennessee in the South, to Virginia in the East, Kansas in the West and Minnesota in the North.

The 2005 Aramark Sprints will feature a field of 21 teams, including eight ranked in the USRowing/Collegiate Rowing Coaches Association Top 20 Poll. The Central Region boasts five Top 15 crews, while the South Region had three crews entered in the Top 20.

Last season, the Hurricanes finished 13th in the 20-team field with 175 points ahead of Clemson who finished with 149 points. Virginia and Duke were the only Atlantic Coast Conference teams to finish ahead of the Hurricanes in first and 11th place, respectively.

Semifinal/Repechage & Finals Progression
Varsity 8+ (21 entries):three heats of five boats, one heat of six boats.
– The top three in each heat advance to the A/B semifinals.
– 4th-5th place in each heat (4th-6th in the six-boat heat) go to the C/D semifinals.
– In each of the A/B semifinal heats, the top three finishers advance to the grand final, while 4th-6th go to the petite final.
– In each of the C/D semifinal heats, the top three finishers go to the C final for places 13th-18th, while the remaining boats go to the D final for the 19th-21st positions.