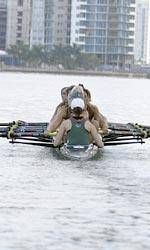 The scrimmage, an informal practice session rather than a traditional race, saw the crews race four pieces, each just under four minutes in length.

“While we’re obviously not as fast as Yale, I’m pleased with the effort and the competition of the day,” said head coach Debra Morgan. “Our rowers took a lot from their experience scrimmaging the No. 2 team in the country.”

“Once our JV got passed the realization that they had to work awfully hard to get ahead of the Yale freshmen, I think some doors opened in their minds as to how hard they need to be working in practice. We’ll be looking for them to carry over this intensity to their practices. There is a whole new level for them if they go after it, “concluded Morgan.

The Hurricanes return to action when they travel west for the San Diego Crew Classic April 2nd-3rd. Stay tuned to hurricanesports.com for the latest Miami rowing news and results.