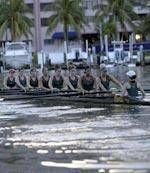 Hurricanes Open Season with Hurricane Invitational and Scrimmage with Yale

Directions to the Hurricane Invitational

CORAL GABLES, Fla.– The University of Miami rowing squad will open their 2005 spring season with the second annual Hurricane Invitational Saturday at Indian Creek in Miami Beach followed by a scrimmage against Yale Sunday in Sarasota, Florida.

Sunday, the Hurricanes will travel to Sarasota for a scrimmage with Yale, whose varsity eight was ranked second in the nation last season. The scrimmage is an informal practice session rather than a traditional race. The crews will race four pieces, each four minutes in length.

The Hurricanes have scrimmaged Yale the past two seasons and will focus mainly on executing their race plan and the margin of distance between the boats. Head coach Debra Morgan looks at the scrimmage as a good way to begin the season.

“This scrimmage gives us a chance to race one of the top teams in the nation several times. If we can’t find a way to make it happen on the first piece, we can come at it again and try something new. It’s a great way to learn how to race.”

Morgan’s goal for the scrimmage is for a Miami boat to outright win a race against one of the nation’ perennial rowing powers; this sentiment is echoed by assistant varsity coach Michael Gilbert who said, “Every time you go up against a truly deserving opponent you learn something. We are ready to be really pushed and see how we’ll respond.”

“We made so many technical changes during the fall that it will be nice to see how much boat speed we have gained,” further noted Gilbert.

This season Morgan will face the challenge of replacing eleven departing seniors from the 2003-04 team that produced an overall points title at the 2003 Head of the Chattahoochee Regatta and a state title at the 2004 Florida Intercollegiate Rowing Association Championships along with second-place finishes at the 2004 San Diego Crew Classic and the 2004 BIG EAST Challenge.

“We had a record breaking season last year. Our goal this season is to equal our speed from last year; to me that would be a great accomplishment because we graduated so many people last year.”

The Hurricanes first step, noted Morgan, is to get back to where the team was at the end of last season.

“We may see a bit more growth through the season rather than coming out really strong. It’ll be a learning experience. If anything takes us out of a race this season I think it’s going to be lack of race experience.”

Last season, the Hurricanes graduated eleven seniors, including five from the varsity eight. In a team where the underclassmen outnumber the upperclassmen, Morgan notes, “We have a lot of talent on this team but it’s kind of this unwieldy young and excited energy. The trick is going to be to harness that energy in a way that is going to make the boat go towards the finish line as fast as possible.”

Despite the graduation of so many seniors, Morgan is still optimistic about the potential she has seen in her squad and the knowledge that was handed down from the seniors who graduated.

“It’s been neat for me to see that the speed that was created by last year’s crew and was largely contributed by last year’s seniors has really stayed with our program. It wasn’t that we had to all of a sudden start from scratch when we graduated so many people. They really handed down some of the speed and some of the technical skills to the rest of team. We were able to start off running this year and had a very productive fall where we just really focused on learning how to row rather than racing so much.”

Novice coach Andrea Saathoff is also excited about the group of student-athletes that make up her novice squad. The novice team consists of mostly walk-ons who had never picked up an oar before joining the team.

“The novice squad is anxious to feel what racing is like and to learn what all our hours of practicing have been for, “commented Saathoff. “The Hurricane Invitational is pretty early so I am not expecting them to race perfectly but I do expect them to execute what we have been working on up to this point. This is truly a great group and it has been so much fun to work with them and to see how far they have progressed from this past fall.”

After the Hurricane Invitational and the scrimmage against Yale the Hurricanes will focus their sights on the San Diego Crew Classic that will take place April 2-3 in San Diego, California. The San Diego Crew Classic is the only spring regatta where schools from all four regions of the country come together to race each other. In what Morgan deems, “an early opportunity to see where we stack up”, Miami will look to improve on last year’s impressive second place finish in the Cal Cup event. This season, the Hurricanes are looking forward to having both the varsity and the second varsity eights competing on a national level.

The Hurricanes are also looking forward to their inaugural season in the ACC where they will join teams like Virginia, who is consistently ranked in the Top 10. “It’s just been a pleasure working with the ACC so far and we’re excited about the quality of their regatta and the competition that we are about to face.”

The UM crew will close out their season at the South Central Regatta where last season both their varsity and second varsity eights won the third final. The goal for this season is to have the varsity eight finish in the top half of the petite final.

For now the Hurricanes, including senior Yassi Haririnia a member of last year’s varsity eight squad, are looking forward to getting back on the water and competing, starting with Saturday’s Hurricane Invitational, “It’s been a really exciting first couple of weeks on the water because we’ve been creating some awesome speed and it’s just the beginning of the season.”

For directions to the Hurricane Invitational and for the latest Miami rowing news and results, stay tuned to hurricanesports.com.