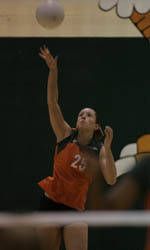 Coral Gables, Fla. – University of Miami senior outside hitter Elizabeth Tyson became only the second player in Miami history to reach the 1,000 career kills mark when she recorded a match-high 12 kills in the Hurricanes’ 3-0 (30-19, 30-17, 30-19) sweep over visiting South Florida on senior night Wednesday evening at the Knight Sports Complex. The Hurricanes improved to 17-9 overall record while remaining 11-5 in the ACC.

Eight of Tyson’s 12 kills of the night came in the third quarter. She also added two assists and seven digs.

The Hurricanes played an emotional match with five seniors, Tyson, Valeria Tipiana, Mallorey James, Jamie Grass and Ashley Youngs, playing in their final home match of their careers. The players are all original members of head coach Nicole Lantagne Welch’s first recruiting class. Together, the quintet has made history for Miami volleyball with an 82-31 overall record in four years. In 2002 they comprised the core of the team that reached the NCAA Sweet Sixteen and ended the season ranked 23rd in the country. Other accomplishments include helping the Hurricanes’ garner second place finishes in both the BIG EAST and ACC Conferences.

“This was a special match with a lot of emotion before and during the match,” said Lantagne Welch after the win. “This group has been here from the start with me. We’ve gone through a lot and have accomplished a lot together. It’s a great way to go out in their final match in Coral Gables.”

“It was awesome that Biz (Tyson) broke 1,000 kills on senior night. It was great that they all played the entire match.”

As a team the Hurricanes held the Bulls to a .000 hitting percentage while hitting .333 with 49 kills. Defensively, the Hurricanes posted 7.0 total blocks and 45 digs.

The Hurricanes held South Florida to a negative hitting percentage (-.026) in game one while hitting .324 as a team. The game proved to be the closest of the match, however, with the score being tied on five different occasions, but the Hurricanes took the win 30-19.

Game two saw the Hurricanes go on a six point run to take an early 10-5 lead. The Hurricanes led by as many as 13 points as they forced seven errors and ran away with a 30-17 win.

The Hurricanes never trailed in the third game, which saw them hit .342 as a team while forcing 10 South Florida attacking errors. Punctuated by Tyson’s eight kills and James’ 15 assists, the Hurricanes closed out the game, 30-20.

The Bulls were led by Johari Williams, who tallied eight kills and by Juliana Nogueira, who registered the only double-double (21 assists, 12 digs) of the match.