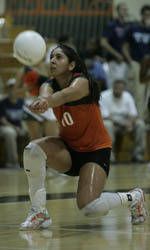 The Hurricanes (15-8 overall and 10-5 ACC) were tied with the Tar Heels for second place in the ACC heading into Friday’s match.

The Hurricanes opened the match with a dominating performance, jumping out to a 11-6 lead early in game one. Miami extended their lead with a four-point run to bring the score to 18-11. The Hurricanes capitalized on four North Carolina attacking errors to close out the game and take a 30-17 win. Miami held the Tar Heels to a match-low -.020 hitting percentage while forcing 12 errors.

A regrouped Tar Heels squad took the court in the second game. North Carolina never relinquished the lead and forced 11 Miami attacking errors. Blocking was the name of the game, with UNC posting six of their 15.0 blocks to take a 30-18 win.

The Hurricanes reversed the score in game three to take a 2-1 match lead. After trailing by three early in the game, the Hurricanes tied the score at six, and then took the lead after Robinson served up an ace between two Johnson kills. Miami stringed together four points to take the lead for good and eventually walk away with a 30-18 win.

As a team, the Hurricanes out-performed the Tar Heels in all but one category. Miami hit 63 kills, 61 assists and tallied 90 digs but were out blocked 14.0 to 15.0.

For the Tar Heels, Molly Pyles led with 20 kills and 19 digs. Dani Nyenhuis also posted a double-double with 14 kills and 10 digs.

The Hurricanes return to action at NC State for their final regular season ACC match-up Sunday at 1:00 pm at the Wolfpack’s Reynolds Coliseum.