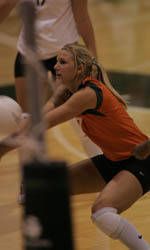 Coral Gables, Fla. – Senior outside hitter Ashley Youngs had a career day, leading all players with a career-high 16 kills to help the Hurricanes sweep visiting Florida Atlantic, 3-0 (30-22, 30-18, 30-22) in non-conference action at the Knight Sports Complex. The Hurricanes improve 8-6 overall and remain 3-3 in the ACC.

Youngs bested her previous career-high of 13 kills in a match. The Naples, Florida native made only one error in 27 swings for a .556 hitting percentage; also a career-high. She was one dig shy of a double-double registering nine digs to go along with two service aces and one block assist. Youngs scored 18.5 of the Hurricanes’ 67.0 points in the match.

“We started passing well which set the tone for the match,” said head coach Nicole Lantagne Welch. “We showed aggressiveness in spurts, but the one player who was truly aggressive from start to finish was Ashley Youngs. She had an excellent match.”

The Hurricanes got to an early start in game one after jumping to a 10-4 lead. FAU pulled within four before a four point run gave Miami a nine point cushion. The Hurricanes never relinquished the lead, eventually taking a 30-22 win.

Game two saw a regrouped FAU squad take the lead for most of the start of the game before the Hurricanes tied the score at 12-12 off a Youngs kill. Miami put on an eight point run highlighted by four Youngs kills to pull away. The Hurricanes led by as many as 10 points to earn the 30-18 win.

In game three, FAU stayed within a few points of Miami before the Hurricanes took a 20-10 lead. The Owls rallied with five points but could not solve the Hurricanes who would win 30-22 and take the match.

The Owls were led by Iana Andonova who tallied 15 kills on 27 swings and Kelly Piava who posted the only other double-digit kill effort with 11.

“You always want to do well against other teams in the state,” commented Lantagne Welch after the win. “Our focus now will be on conference play. We’re excited for this weekend.”

Miami returns to ACC action Friday night when they take on NC State at 7:00 pm at the Knight Sports Complex.