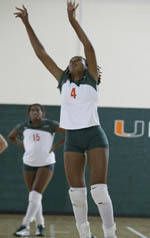 Coral Gables, Fla. – The University of Miami volleyball team pulled off the second three game sweep in as many days when they defeated Wisconsin-Milwaukee Saturday evening in their last match of the Hurricane Ivan-Sugar Bowl Classic held at SMU’s Moody Coliseum in Dallas, Tex. The Hurricanes improve to 4-3 in their final non-conference tournament of the season.

Both teams exchanged leads to keep the game within one point until two kills from Johnson and a service ace from Tyson pushed the score to 13-11 in Miami’s favor. The Hurricanes scorched the Panthers with four consecutive kills for the 30-21 win. As a team the Hurricanes hit .444 connecting on 19 kills while holding Wisconsin-Milwaukee to a .250 attacking percentage.

The Hurricanes capitalized on a 9-for-31 kill performance to win game two. Early Panther errors gave Miami a 4-2. The Hurricanes then went on an 11 point run to take a commanding 15-3 lead. Tipiana connected on four service aces while Tyson hit three during that span. Miami closed out the game at 30-18 after a Tipiana kill. The Hurricanes held the Panthers to a .129 attacking percentage.

In game three the Hurricanes faced a regrouped Milwaukee squad that challenged for the lead throughout the start of the game. Miami responded with a four point run punctuated by kills from Tyson and Tipiana and a block from the senior duo along with redshirt freshman Ciara Michel. Johnson’s kill would bring Miami to game point before a panther attacking error gave the Hurricanes the 30-18 win and the match.

Miami posted a .431 attacking percentage as a team while recording 59 kills and 7.5 total blocks.

The Hurricanes return to action when they take on rival Florida State for their home opener and first conference contest of their inaugural season in the Atlantic Coast Conference. The match is set to start at 7:00 pm in the Knights Sports Complex.