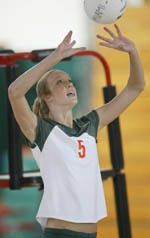 Dallas, Tex.- – Redshirt freshman middle blocker Ciara Michel went 11-for-14 with only one error for a .714 attacking percentage to help lift the University of Miami women’s volleyball team to a 3-0 win (30-20, 20-28, 31-29) over Hurricane Ivan-Sugar Bowl Classic host SMU at Moody Coliseum Friday evening. The Hurricanes are now 3-3 on the season.

“Ciara came up big for us,” said head coach Nicole Lantagne Welch. “She came to tonight’s match ready to play. She was a big lift for us.”

The 6-4 Miami, Fla. native tallied four block assists and accounted for 13 of the Hurricanes’ 77 points in the match.

“Jamie came up big in the back row,” added Lantagne Welch.

Both teams started game one exchanging points to keep the lead within one point. Miami took the lead when, tied at 10, Tipiana registered a kill to give the Hurricanes the ball. Johnson would then connect on a service ace followed by a kill from Michel to put 13-10 in Miami’s favor. The Hurricanes broke the game open when they went on two four point runs to bring the score to 27-18. Miami eventually won the game with consecutive points highlighted by Johnson’s kill to end it at 30-20.

Game two started differently with SMU taking an early 13-7 lead before the Hurricanes pulled within three on back-to-back points. SMU went on to regain the lead at 20-15. But it was SMU’s time out with the score at 22-20 that gave Miami the push it needed. They went on a three point run to take the lead. The Mustangs tied the score at 26 before Michel’s kill gave the Hurricanes the lead for good.

The third game was all SMU who maintained a 24-17 lead punctuated by a seven point run, until the very end. UM tied the game at 26-all after a Johnson kill. Johnson tallied three kills in Miami’s own seven point run later in the game. The Hurricanes broke a 29-29 tie and scored the final three points of the match book ended by Tipiana’s service ace and senior outside hitter Elizabeth Tyson’s kill for the 31-29 comeback win.

“This match was a complete team effort,” commented Lantagne Welch after the match. “We were productive in every area of our game. Our middle blockers were very effective. They were able to open things up for us.”

The Hurricanes return to action when they take on Wisconsin-Milwaukee at 5:00 p.m. (CST) for their final game of the Hurricane Ivan-Sugar Bowl Classic.