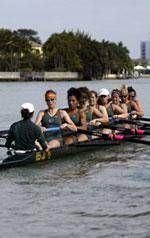 CORAL GABLES, Fla. – The University of Miami rowing team wrapped up the final day of competition Sunday at the 2004 Lexus Central/Southern Sprints at Melton Hill Lake in Oak Ridge, Tenn. with the Hurricanes’ Varsity Eight and Junior Varsity Eight taking first in their respective finals and the Novice Eight placing fifth in the Grand Finals.

The Miami V8 boat’s time Sunday bettered their mark of 7:08.3 in Saturday’s semifinals by almost 12 seconds and would have placed the Hurricane crew ahead of Kansas (7:05.4) and just two-tenths of a second behind 20th-ranked Duke (6:56.8) in the Petite Finals.

“I was impressed with how our Varsity Eight and Junior Varsity Eight were able to respond to the disappointing heat races from yesterday,” Head Coach Debra Morgan said. “They really pulled themselves together today and had a great performance.”

The Hurricanes’ N8 crew took to the water Sunday to finish with a time of 7:16.0 taking fifth place, marking the highest finish for a Miami Novice Eight crew since the inception of the regatta in 1997.

“I was quite pleased with the Novice Eight. I really think they were able to step up to the challenge and really elevated their performance a whole other level this weekend,” Morgan said.

Behind the three boats, the Hurricanes finished 13th overall at the eighth annual Central/Southern Sprints and fifth in the South Region among 23 schools including eight crews ranked in the USRowing/Collegiate Rowing Coaches Association top-20 varsity eight polls.

“Overall, this weekend was a great way for us to cap off what has been a very successful season,” Morgan stated.