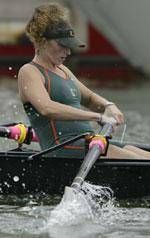 CORAL GABLES, Fla. – The University of Miami rowing team will take to the waters of Melton Hill Lake in Oak Ridge, Tenn. this weekend for the 2004 Lexus Central/South Sprints held Saturday, May 15 and Sunday, May 16.

Vying for a bid to this year’s NCAA Championships in Sacramento, Calif., the eighth-annual sprints will feature 23 schools from the Central and South regions, eight of which are ranked in the USRowing/Collegiate Rowing Coaches Association (CRCA) Varsity Eight poll. Saturday’s opening heats are slated for 9 a.m. followed by semifinals at 2 p.m. Racing will conclude Sunday with finals beginning at 9 a.m.

“We’re going to be racing a lot of crews, such as Wisconsin, Iowa and Kansas, that we have not seen this season,” Morgan said. “From that standpoint, this regatta is a bit of an unknown quantity for us. Our first goal is to place higher in each event than we did last year. After that, we’ll just knock off as many crews as possible.

“We’ve had a tremendous year and I think this weekend will give us an opportunity to put a good finish on all that we have accomplished,” Morgan added.

This year will mark the Hurricanes’ sixth visit to the Central/South sprints since it’s inception in 1997. Miami placed 12th overall in 2003, three spots below their school-best finish of ninth in 1997.