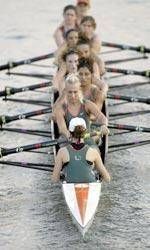 CORAL GABLES, Fla. – The University of Miami rowing team’s varsity 8 crew turned in first place finish with a time of 6:56.40 Saturday morning in the first heat of the qualifying race for the Cal Cup at the 31st-annual San Diego Crew Classic on the waters of Mission Bay in San Diego, Calif.

The Hurricanes time was the third fastest overall in each of the three heats and gives UM a birth in Sunday’s Grand Finals.

“These were perfect conditions and this is such a phenomenal regatta,” Head Coach Debra Morgan said. “I really think today gave us a chance to make a statement for our program.”

The Hurricanes distanced themselves further from the pack at the half-way point, pulling away from second-place Clemson by 1.65 seconds.

UM continued to push even further ahead in the third stage of the race, increasing the gap ahead of the Tigers by 1.92 seconds.

With a spot in Sunday’s finals on the line, Miami would maintain it’s momentum to hold off the Clemson in the final 500 meters, taking first place with a mark of 6:56.40.

“We definitely had a great race today. We have made some changes since our last race with Clemson two weeks ago and obviously they worked out for the best,” Morgan said.

The Hurricanes will return tomorrow for the Grand Finals of the Cal Cup, taking on Clemson, Loyola Marymount, UCLA, Navy and Louisville.

“I really hope we get to enjoy being in tomorrow’s finals and we are looking forward to having our best race of the year,” Morgan said. “We have so much great chemistry in this line-up and I feel that is one of the major reasons we have been able to do so well.”

“Hopefully we will be able to build on what we achieved today,” Morgan added “Tomorrow should be a very close race with six boats across going seat for seat.”

Sunday’s race is slated to begin at approximately 11:10 a.m.