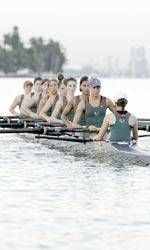 CORAL GABLES, Fla. – The University of Miami rowing team will head to the state of California this weekend to take part in the 31st annual San Diego Crew Classic on the waters of Mission Bay in San Diego, Calif on April 3-4.

The Hurricanes’ Varsity 8 crew of Laura Comeau (cox), Karen Wiley, Jenny Krawec, Jacqui Julien, Sarah Conlon, Ashley Marincsin, Caroline Stuart, Rachel Clausing and Jordanna Heywood will compete with 17 schools from across the nation in three heats on Saturday with the top two finishers from each heat moving on to Sunday’s Grand Final for the Women’s Cal Cup. Miami will lineup against six schools including Clemson, Sacramento State, San Diego State, California-Davis, Santa Clara and Rollins in the first heat beginning at approximately 7:30 a.m.

“The San Diego Crew Classic is a great season opener to the regatta season,” head Coach Debra Morgan said. “Our Varsity 8 is looking to carry over some excellent changes they have made in practice to their race day performances.”

This will mark UM”s second trip to the San Diego Crew Classic. At the 2003 regatta, the Hurricanes placed third in the opening heat of the Cal Cup with a time of 7:27.01.

For all your Hurricane Rowing news and notes please visit hurricanesports.com.