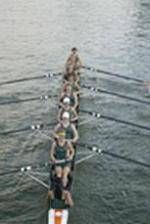 Hurricanes Travel to Boston for XXXIX Head of the Charles Regatta

The University of Miami women’s rowing team will compete in the XXXIX Head of the Charles Regatta in Cambridge-Boston, Mass., October 18 and 19.

The two-day event features over 7,000 athletes from around the world competing in 21 races and attracts up to 300,000 spectators. The world’s largest regatta begins at Boston University Bridge and concludes at the Elliot Bridge.

Last year at the Head of the Charles, the UM Varsity Eight placed 42nd in the Champion Eight event after being assessed a one minute penalty for interfering with another crew’s progress on the race course.

“We’re definitely looking to better out result from last year,” Head Coach Debra Morgan said. “The crew is really driven to see how high they can place.”

This will mark the first time in school history the Hurricanes will have a crew in the Youth 8 event, a lineup that requires requires each member of the crew to be under the age of 20 and must be either a high school student or freshman in college. The crew includes coxswain Meghan Leydecker, stroke Karen Wiley, Sarah Conlon, Valerie Webb, Laura Coltman, Alicia Alamar, Ashley Via, Molly Wilson, and bow, Marenda Chamberlin.

For any information on the women’s rowing team visit hurricanesports.com.