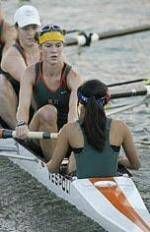 The University of Miami women’s rowing team launches the 2003 fall racing season at the 11th annual Head of the Indian Creek Regatta on Sunday, October 12,. at the Ronald Shane Watersports Center in Miami Beach, Florida. Racing starts at 8:00 a.m. and is free to the public.

The squad will be led by co-captains Jordanna Heywood and Rachel Sander and Canadian Under 23 National Team member Jenny Krawec. In addition, those returning from the 2002-03 varsity eight are Ananda Chou, Jacqui Julien, Caroline Stuart, and Bridget Gallagher. Yennisha Pino and Anna Cohen from last year’s second varsity eight are also expected to be strong contributor.

The first varsity eight will be pressed to keep their seats by last year’s freshman class that captured the Gold Medal at the Florida Intercollegiate Rowing Association Championships (FIRA), as well as this yea’sr group of talented freshman.

The event which takes place on a 2.8 mile course on the scenic Indian Creek in Miami Beach,will feature over a 1000 rowers competing in several race categories (high school, masters, colleges, and open classes) from recreation singles to championship eights.

“The Head of the Creek Regatta is an excellent warm-up for the Head of the Charles next weekend,” said head coach Debra Morgan. “We have a lot more depth this year. In practice race pieces, all three varsity eights are beating the times of last year’s top varsity eight. That’s encouraging to say the least.”

Hurricane Rowing travels to Boston-Cambridge, Massachusetts, October 18-19, for the XXXIX Head of the Charles Regatta.

2003 Head of the Creek Events Schedule