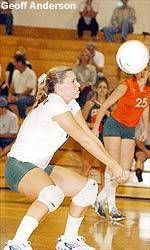 The Hurricanes (10-4) re-gained the inner-city bragging rights by overpowering FIU (8-4), out hitting the Panthers .259 to .071, the second lowest hitting percentage by a Hurricane opponent this season, to sweep the match in three games.

“I thought it was a great overall team effort,” Head Coach Nicole Lantagne Welch said. “Jamie Grass had an excellent match, both passing and on the defensive side. Jill Robinson set the best match we’ve seen so far this season. We clicked as a team. We were hungry for the win and got after it from start to finish.”

The Hurricanes rolled through the first game, taking FIU, 30-24 on a game-winning kill by junior Valeria Tipiana on an assist by Robinson.

The Panthers refocused to give Miami a run the second game, jumping out to an early lead. The Hurricanes tied the game up at 10-10 on a kill shot by sophomore Robin Lewullis. From that point on the two teams would swap the lead seven times before Miami would edge out the Panthers, 30-24 on kill by Lewullis to take a two-game lead into the third frame.

The Hurricanes used the momentum to take a 13-5 lead on FIU in the third game before going on a 6-2 run to lead the Panthers 19-7. Miami would not look back, leading by as much as 14 at 29-15. Miami would seal the game, 30-16 and the match on junior Elizabeth Tyson ninth kill of the match.

Senior Leyre Santaella Sante teamed with Tipiana for 10 kills each. Jill Robinson had a match-high 37 assists for the Hurricanes and Grass collected 13 digs in the win. Lewullis paced Miami with a .400 hitting percentage with eight kills on 15 attempts.

The Hurricanes will open BIG EAST play this weekend, traveling to New Jersey to take on Seton Hall on Sept. 27 and Rutgers on Sept. 28.